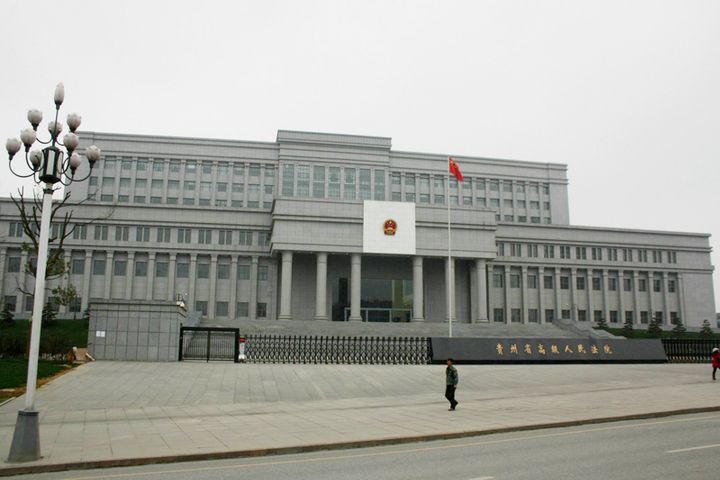 (Yicai Global) Aug. 29 -- A top priority of Sun Chao, head of the Higher People's Court of Guizhou province in Southwest China, is to promote applications of internet technology in judicial processes.

"The aim of our work is to make courts courts, and make judges judges," Sun told Yicai Global. Sun is a leading legislation researcher, and has become an iconic figure in China's legal system reforms. He recently transferred to Guizhou from Shanghai.

"In an information society, judges are confronted with an increasing number of knowledge gaps as the degree of specialization continues to rise, so a judge is prone to making misjudgments if she doesn't have the time to broaden her knowledge," Sun said. Such misjudgments are miscarriages of justice in the eyes of parties concerned, he said.

The court developed an adjudication assistance system, Judgment Deviation, in collaboration with several technology developers. It acts as a big data-powered legal mirror.

"We synthesized all judicial interpretations, past cases and local regulations that a judge may possibly need when litigating law suits, and the system can analyze cases automatically, and put forward suggestions to the judge based on big data analyses," said Sun. "The so-called deviation metrics shows the difference between the judge's own judgment and the [output] of the data system, and the difference may be caused by evidence flaws or jurisprudential logic conflicts."

Judgment Deviation can remind a judge to think about why s/he has reached a judgment, why his/her judgment is different from rulings in similar past cases, and what makes them different. A deviation does not necessarily mean that something is wrong with the judgment, as every case is unique.

The technology developers think that judges can justify deviations because all legal cases are distinct. From the perspective of judges' superiors, the judicial deviation system can help them assess how impartial a judgement is.

"If we approach the matter from the perspective of judicial power, to assess deviation is to determine who can decide if a given judgment is right or wrong, and who is responsible for preventing judges from making wrong judgments," Sun said. With the deviation system, judges can learn from past rulings, which will help them seek legal wisdom by comparing different decisions, he said.

Sun thinks that he has chosen the most difficult road to combine technology with judicial practices.

He said his court muddled through a very hard time since early last year, but it managed to mobilize judges to learn and apply big data technology, and put what they learned into practice.

While developing the big data assisted system, the court introduced the system to litigation practices. Judges' workload varies from case to case, but the system can reduce their overall workload by about 50 percent, regardless of case progress. "With the help of the legal mirror system, a 30-year-old judge can be as experienced as a judge 20 years her senior," Sun said.

The biggest value of big data applications does not lie in faster and more efficient adjudication, but in the fact that they can safeguard justice, Sun said.

The big data system is very convenient, and helps judges justify their rulings, enabling them to apply legal criteria more accurately, a source at the Guizhou court said. The system has become a mirror judges to use to assess their work, he said.

Judges have personal preferences when selecting evidence, but the big data system prevents them from making random decisions in work, the source said.

"We must establish a complete logic chain in every step of the litigation process, and we are not allowed to deviate from the chain or make random decisions," he said. "We need to justify our decisions if they deviate significantly from the usual logic -- why we made that particular decision, and if it is based on legal foresight or the unique nature of the case."

"In most cases, the parties and judges have benefitted from the big data-assisted litigation system," he opined. Collection of information about similar cases, existing laws and judgements is at the core of the big data technology. Judges can now base their decisions on millions (and sometimes tens of millions) of similar cases litigated in the past.

Many judges at the court feel that big data makes their judgment look more well-founded when they need to explain their decisions.

"The judgment acceptance level among litigants has substantially improved -- just imagine what it feels like if a party knows that the judgment is based on five million similar cases," Sun said.