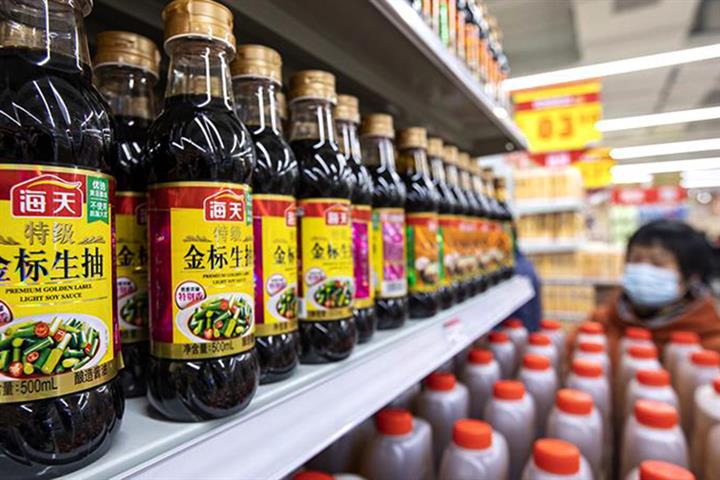 (Yicai Global) Oct. 10 -- Shares in Haitian Flavoring and Food plunged today after the Chinese soy sauce producer tried to downplay an online spat about ‘double standards’ by saying that some of its food products contain additives and some do not, and both types are sold in China and abroad.

"China is Haitian's largest market. Meeting the diversified needs of consumers while ensuring the quality and safety of products requires the domestic product line to be more diverse," the Foshan, southern Guangzhou province-based company said yesterday.

Haitian has recently been accused by netizens of selling food products containing additives in China, while those sold in Japan have zero additives.

Haitian's double standard problem is due to different industry standards in China and Japan, said Bo Wenxi, chief economist at marketing solutions provider Interpublic Group China. It is not the company's choice. As long as Haitian adheres to industry standards in the country where the products are made and sold, any differences in the ingredient lists are legal.

All products are produced in accordance with food safety regulations and are subject to regular inspections by authorities, Haitian said on Sept. 30. The use and labelling of food additives are in full compliance with China’s standards and regulations.

In the first half, Haitian logged a 1.2 percent gain in net profit to CNY3.4 billion (USD478 million), while revenue climbed 9.7 percent to CNY13.5 billion (USD1.9 billion). Soy sauce accounted for 59 percent of sales at CNY7.4 billion.

Haitian’s soy sauce can be found in more than 80 countries and regions. It also produces other condiments such as oyster sauce, vinegar, cooking wine and hot pot soup bases. It has an annual output value of more than CNY20 billion (USD2.8 billion).