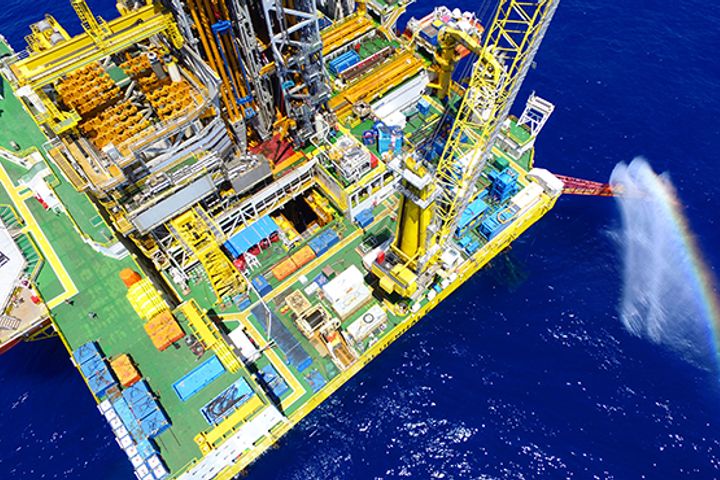 (Yicai Global) June 26 -- The Ministry of Land and Resources' China Geological Survey has extracted natural gas from the combustible ice mineral reserve in the South China Sea, which is 1,266 meters below sea level, since May 10, 2017 in the country's first successful trial mining of combustible ice at sea. Combustible ice, which is also known as natural gas hydrate, is regarded as a new energy source and many hope it can replace coal and oil.

Continuous gas production took place for 31 days from May 10 to June 10, setting a record of one full month. The gas output of the trail extraction on the Shenhu Sea Area Platform has reached 210,000 cubic meters, and the average daily output was 6,800 cubic meters. The production process is currently smooth, the well bottom is in good condition, and 2.64 million pieces of data have been collect, laying a sound foundation for further work.

This historical technological breakthrough will be instrumental in China's energy structure and safety, and the global energy supply setup. Its influence should not be underestimated.

The ASEAN claimants in the South China Sea mainly include Vietnam, the Philippines, Malaysia, Brunei and Indonesia, which use fossil fuels such as oil, natural gas and coal as their primary sources of energy utilization. Brunei, Indonesia and Malaysia are oil and gas resource exports and a large portion of their exports are energy related. Vietnam and the Philippines are energy-deficient and have a relatively scarce domestic energy resource supply and an urgent demand for energy resources for economic development.

Energy resources are the lifeblood of economic development. For ASEAN claimants in the South China Sea, both the oil and gas exporters and those with energy deficiencies, the strategic value of energy resources for economic development and international competitiveness is self-evident. As traditional oil and gas resources will be exhausted by continuous development and utilization, it is imperative that alternative energy sources are sought out. It is estimated that the South China Sea has nearly 80 billion tons of combustible ice reserves. With such a huge amount of combustible ice resources, the ASEAN claimants will not be indifferent.

So far, China has become the first country capable of carrying out test exploitation in its sea areas and achieving continuous and stable gas production. China's trials marked the world's first secure and controllable exploitation of the sandstone-type natural gas hydrate that accounts for over 90 percent of global combustible ice resources and is the most difficult to exploit.

After China's commercialized exploitation model of combustible ice is mature, the new energy resource can be used as a substitute for traditional oil and gas resources. China's technological superiority will contribute to the willingness of South China Sea claimants in ASEAN to exploit combustible ice resources in the sea area by cooperating with China.

China's head start in the commercialized exploitation of combustible ice will become an opportunity for energy cooperation in the South China Sea. Provided China keeps its leading position in commercialized combustible ice exploitation technologies and develops exclusive technologies, the country will be better equipped to prevent major countries from outside the region from interfering.

China's leading position will also help it spot common interests with sovereignty claimants for the South China Sea in ASEAN during their dispute. If concerned parties work together to make use of combustible ice resources in the area, they will mutually benefit and achieve win-win results. This could ease tension in the South China Sea, and the parties could jointly maintain peace and stability in the area.

So far, China's exploitation technology is still being tested, and technological improvement and experience will be required before extensive commercialized exploitation can take place.

By summarizing test knowledge, it is expected that production test technology will be optimized, advanced experience from developed countries will be absorbed, and technical standards and systems that match the resource features of China will be established and improved. China should set up key national laboratories, engineering technical centers and other innovation platforms to improve its R&D and innovation ability in the exploration and development of combustible ice and in deep sea technology.

The combustible ice reserves at the pelitic siltstone reservoir are widely distributed across countries along the Maritime Silk Road. China's advanced development technologies in this respect can be applied in these areas, which will help resolve energy problems in countries along the route and promote the integrated economic development of those countries.