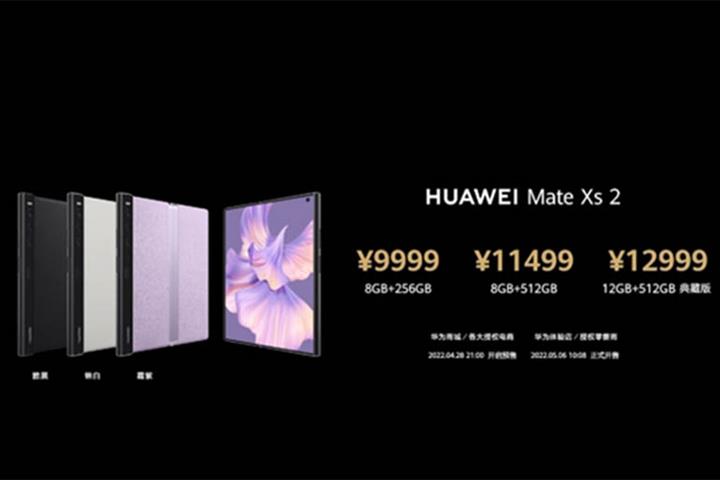 (Yicai Global) April 29 -- Huawei Technologies released its first new foldable mobile phone model of the year yesterday. Part of the Chinese telecoms giant's long-running Mate series it is the lightest foldable smartphone on the market and is available at a starting price of CNY9,999 (USD1,500).

The Mate Xs 2 weighs only 255 grams, the same weight as a bar of chocolate. It unfolds from left to right into a 7.8-inch ultra-clear screen with a resolution of up to 2,480 x 2,200 pixels. It boasts unique indoor precise positioning technology and supports multi-floor indoor navigation. The new phone started presales yesterday and will begin retailing on May 6.

As the fifth-generation of Huawei’s folding screen handsets, it resolves three major shortcomings in bendable phones, namely the weight, an uneven screen and fragility. The Mate Xs2’s drop resistance is two-and-a-half times that of the Mate Xs and the screen flatness is a 70 percent improvement.

Global sales of folding screen phones tripled last year from the year before to nine million units, according to market research firm Counterpoint. Their growth rate is much higher than ordinary smartphones. And although the market share is still small, foldable phones are expected to account for as much as half of high-end mobile phone sales by 2025.

Huawei accounts for almost half of China’s foldable smartphone market, taking a 49.3 percent slice last year, according to International Data Corp’s data. South Korea’s Samsung follows with a 28.8 percent share, Xiaomi with 13.2 percent and Oppo Mobile Telecommunications with 6.1 percent. China had about 1.5 million foldable smartphones on the market last year, it said.