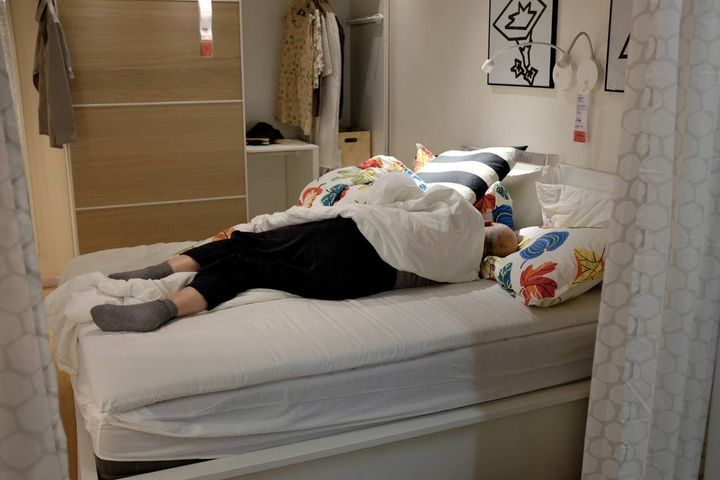 (Yicai Global) Oct. 30 -- Despite heavy media criticism of those who tend to sleep in Ikea China stores owned by the Swedish company Inter Ikea Systems B.V., the world's top furniture retailer, the company is tolerant of such behavior and believes it pays off, reported National Business Daily.

In other countries, many people drive to Ikea stores generally located in suburban areas to buy furniture in a one-stop shopping experience and drive back home, while in China, many people regard going to Ikea as a weekend pastime activity.

A lot of people come here to enjoy the free environment with air-conditioned beds, a spokeswoman of Ikea in China said, "I need to stress that we won't issue new rules banning customers from sleeping in the store, however, if the sleeping customers affect the others' shopping experience, our shop assistants will only politely ask them not to sleep over there." They welcome the customers trying to sleep at the store, the spokesman added.

Ikea is also rewarded for its "patience" with Chinese customers. Although Ikea began to make profits 12 years after entering the country, China is now Ikea's fastest growing market in the world, with operating revenues jumped 19 percent last year.

In 2015, some middle-aged and elderly people started using Ikea store cafeterias as a social  venue without spending money on food and drinks, making it impossible for purchasing customers who actually go there to eat to find no seats. This has prompted Ikea to introduce a "no pay, no stay" policy, prohibiting people from occupying seats if they don't buy food or drinks.

That must be why Ikea food and beverage department in China generated CNY 1.2 billion (USD180 million) in operating revenue, outstripping the rest of the Ikea stores globally.