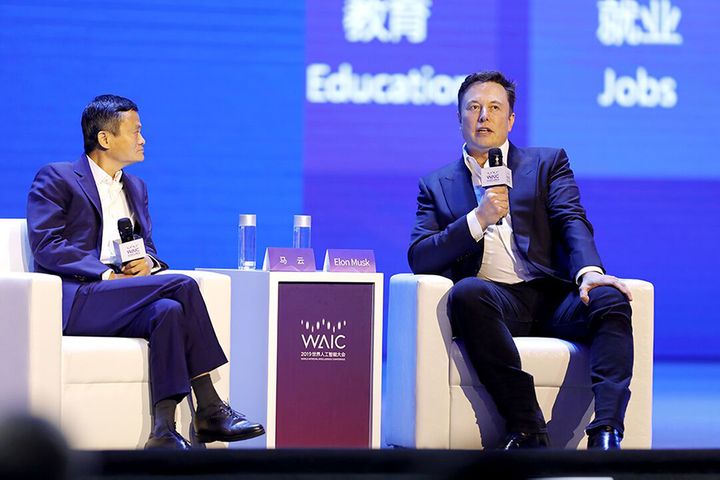 (Yicai Global) Aug. 29 -- Jack Ma, the executive chairman of Alibaba Group Holding, and Elon Musk, the chief executive of Tesla, have offered their differing views about the future of humankind and ultimately, whether robots can outsmart humans.

The biggest mistake for AI researchers is that they think people cannot be outplayed because machines will become brighter than humans, Musk said during a talk on stage with Ma at the World Artificial Intelligence Conference in Shanghai today.

Ma contested. AI is not a threat because humans are smart, said the chief who will give up his role as executive chairman in less than two weeks. He seemed to be pleased with where the Hangzhou-based tech behemoth stands with emerging technologies as he dubbed AI "Alibaba Intelligence."

Musk reminded how married people have become to their technologies. With their close connections to cell phones and computers, people have adopted machine features and machines have become an extension of people's lives, he said. This is why forgetting one's phone home may seem like missing an arm, he added.

If robots truly are smarter and plotting to take over, Musk has an exit plan in mind. External forces may destroy the planet so people should protect the future of mankind via migration to another planet, he said. For the first time in the 4.5 billion years of Earth's history, there is a possibility of leaving to go live somewhere else, he said.

Ma said that he admires Musk's plan to put 1 million people on Mars but personally he is more focused on how to support sustainability so that the world can accommodate its over 7 billion people. In 2016, Musk claimed that Mars will have a self-sustained civilization by the 2060s.

Regarding human lifespan, Musk said people should not worry as they could buy services from Neuralink, his venture that is developing implantable brain-machine interfaces, to save their status like that of a game. Extending life genetically still requires more consideration, he added.

Technology may make humans live longer and healthier lives but they should not entertain illusions, Ma said.

Tesla is building its first overseas factory in Shanghai and Musk said he is very satisfied with the work done by the California-based company's China team. In fact, he said that he has never seen such a fast pace of construction before. The Gigafactory is expected to start churning out new energy vehicles by the end of this year.