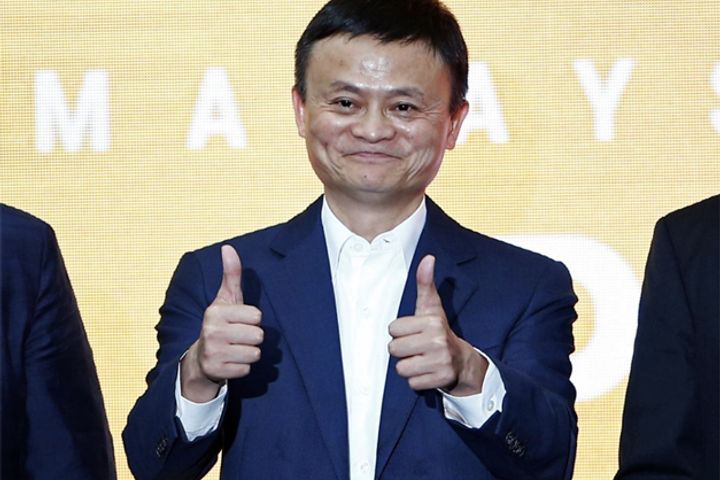 (Yicai Global) Oct. 10 -- Jack Ma has been named as China's richest person in the 20th edition of the Hurun Report, marking the Alibaba founder's return to the top after four years.

Assets belonging to Ma and his family increased CNY70 billion (USD10.1 billion) in the first haf of the year to reach CNY270 billion, according to the 2018 edition of the report from the Hurun Research Institute.

The rising valuation of Alibaba's fintech affiliate Ant Financial Services Group was a key factor in Ma's return to the top, the report states without disclosing specific data on the Hangzhou-based company's growth in valuation. The firm's pre-tax profit grew by just shy of two-thirds in the 2018 fiscal year to hit CNY9.1 billion.

Ma nudged Xu Jia, chairman of real estate developer Evergrande, into second place with a personal wealth of CNY250 billion. Tencent founder Pony Ma came in third after seeing a CNY10 billion fall in wealth to CNY240 billion. Stock market declines played in a key role in the decline of the pair, especially Ma who saw a reduction in assets for the first time since his inclusion in the report.

There is a CNY100 billion disparity between the respective personal wealth of the top three and fourth-placed Yang Huiyan, who serves as vice-chairman at property developer Country Garden Holdings. Yang remains China's richest female entrant with a wealth of CNY150 billion.

China is home to 1,893 entrepreneurs with wealth in excess of CNY2 billion, Hurun Report Chief Researcher Rupert Hoogewerf explained. Hoogewerf is also known by his Chinese name Hu Run, from which the name of the research institute derives. The figure has fallen by 11 percent compared with last year's report following stock market declines, he added.

Colin Huang, the founder and chief executive of recently listed e-commerce company Pinduoduo entered the list for the first time at 13th with CNY95 billion, while Xiaomi founder Lei Jun has gained CNY40 billion in assets following his company's own float in Hong Kong. He subsequently moved up 12 places to 10th with CNY110 billion.

The blockchain sector has become the fastest-developing sector in terms of the creation of billionaires with 14 newcomers on the list. Micree Zhan, the chairman of Bitmain Technology, ranked 95th and becomes the richest person within the sector with assets of CNY29.5 billion. Ge Yuesheng, the 26-year-old shareholder in Bitmain Technology led all peers born after 1990 with CNY3.4 billion.