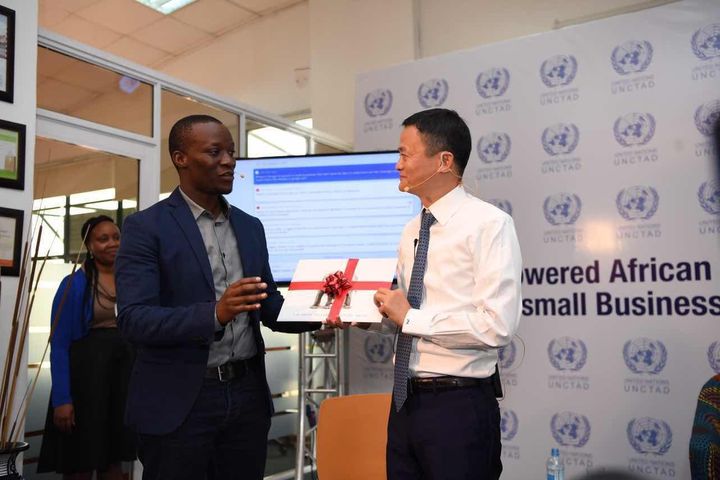 (Yicai Global) July 25 -- Jack Ma, board chairman of Alibaba Group Holding Ltd. [NYSE:BABA], will invite up to 500 African entrepreneurs to receive training on e-commerce and government operation in Hangzhou, capital of East China's Zhejiang province, where Alibaba Group is headquartered, next year. Jack Ma said during a recent visit to Africa that he wishes them to bring experience back to Africa to offer training to more local entrepreneurs.

Jack Ma's first stop as part of his tour in Africa as a special advisor to the United Nations Conference on Trade and Development was Kenya. The East African country has a developed airline network and fastest growing mobile payment sector on the continent. Internet technologies enable Africa to achieve rapid growth in mobile payment sector due to the weaknesses of the traditional financial industry.

Alipay, Alibaba's, has expanded into Africa lately, but it is mostly used for online payments such as booking tickets on a local airline website as well as on a hop-on hop-off bus service website in South Africa.

However, in line with internationalization methods of Ant Financial, Alibaba's financial services arm, QR scanning payment method may soon be introduced in Africa. When answering a question from a local young Kenyan, Jack Ma said Alipay is seeking local partners.

It is reminiscent of how Alipay penetrated regions such as Japan, South Korea, Southeast Asia, Finland, Italy and France. With internet gaining popularity in Africa, the continent has become an important market for Alibaba's globalization efforts as it boasts a rising consumption and potential entrepreneurship market. Alibaba has entered Africa mainly through www.alibaba.com and www.aliexpress.com, which engage in export wholesale and retail operations, respectively.