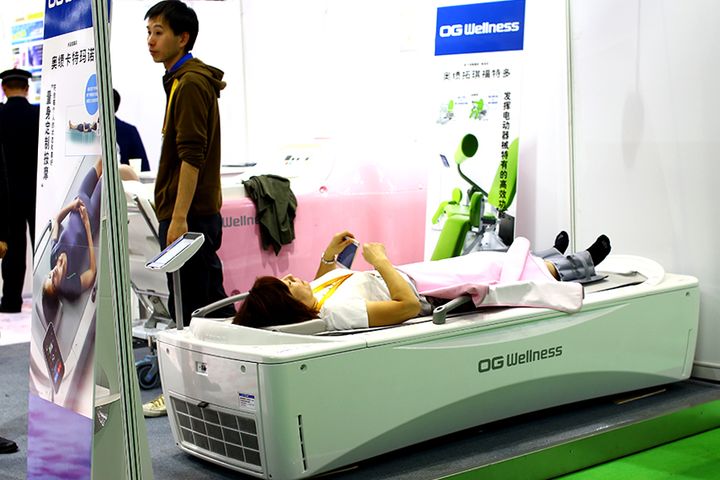 (Yicai Global) Nov. 12 -- Japanese companies used this year's China International Import Expo as an opportunity to showcase their latest developments in the elderly care and medicine fields as the world's most populous nation looks to deal with its aging citizens.

The Japan External Trade Organization reserved exhibition space for a host of Japanese small- and medium-sized enterprises to show off their new equipment at the CIIE's dedicated pavilion for medical devices and healthcare products. The SMEs' booths were mostly just nine square meters in area but lured in plenty of Chinese visitors who were intrigued to learn about their wares.

Japan and China are both facing the challenge of an aging population, JETRO Shanghai's Managing Director Michiaki Oguri told Yicai Global, adding that Japanese firms wanted to share their approaches to dealing with the issue.

Around 27 percent of Japan's is 65 or older, according to World Bank data, which gives it the largest proportion of elderly citizens than any other country. It has been struggling with its aging population since 1994, and Oguri believes the same problem is attracting more attention from the Chinese government.

Kurokawa Masahiro, President of the Japan Anti-Aging Center, agreed. There has been a marked increase in the number of Chinese government officials going to Japan in recent months, he told Yicai Global, adding that they were looking at how to build nursing homes; how to train workers in the field; and what equipment was suitable for the elderly.

Some 50 Japanese medical firms were at the event to show off their medical and nursing equipment, health foods and medical services, according to data from JETRO. Some of the more popular products on show included Art Plan's mobile care robots, Inoac Living's bedsore-prevention mattress, Tanotech's dementia prevention and rehabilitation system, and OG Wellness's bathtub for the elderly.

Big name industrial giants like Hitachi, Mitsubishi and Toshiba also brought their latest medtech equipment to the event, which ran in Shanghai from Nov. 5 through Nov. 10. This included Hitachi's particle therapy system for treating cancer.

Thirty-one medical institutions around the world are already using the system to treat more than 16,000 patients, according to a Hitachi worker who said a lot of Chinese visitors had expressed an interest in it.