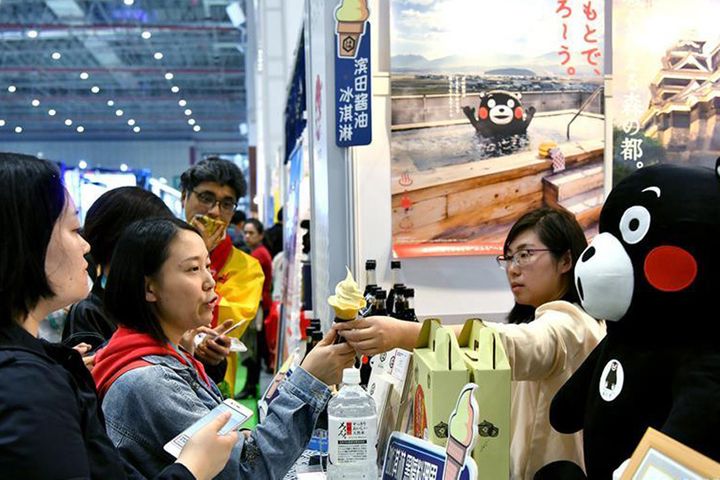 (Yicai Global) Oct. 30 -- A total of 158 Japanese small-and medium-sized companies will participate in the second China International Import Expo, appearing in the food and agricultural products and medical instruments and healthcare exhibition areas.

JETRO is responsible for organizing Japanese small- and mid-sized companies to take part in the second CIIE. Of the 158 participating, 108 will display in the food section, while the remainder will showcase their wares in the healthcare zone, according to the Tokyo-based quasi-governmental trade promotion agency.

Japanese products and the country's service sectors offer great opportunities for Chinese, who are nowadays pursuing a high-quality lifestyle and development, Michiaki Oguri, president of JETRO's Shanghai office, told Yicai Global, adding he expects to witness the entry of even more first-class Japanese goods and services into the Chinese market to aid the country in its industrial upgrade.

The value of Japanese export foodstuffs and other products from agriculture, forestry and fisheries to China was JPY134 billion (USD1.2 billion) last year in an almost one-third rise over 2017, according to statistics from Japan's Ministry of Agriculture, Forestry and Fisheries. China has already passed the US to become Japan's largest recipient of exports, taking in nearly one-fifth, with a total value of USD144 billion last year, public data indicates.

Larger Japanese companies, including Tokyo-based conglomerate Hitachi, Kyoto-headquartered electronics maker Omron and logistics company Nippon Express, will also be on hand to present their latest technologies at this year's expo.