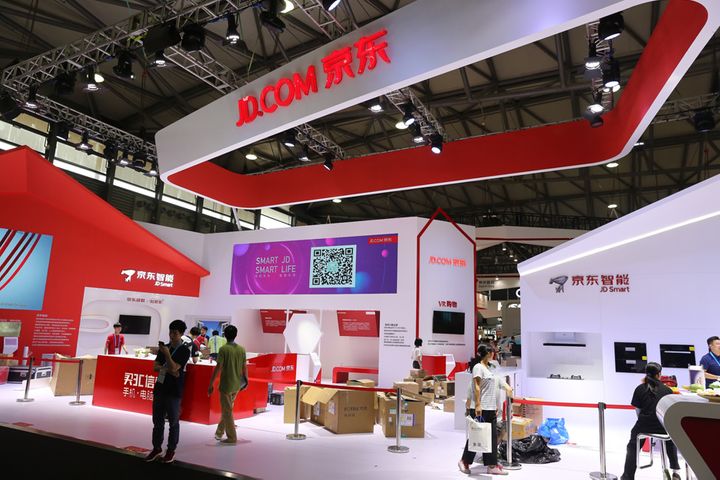 "We will copy our success in the  offline sector," Yan Xiaobin, senior vice-president at JD and president  of JD Home Appliances, said at this year's annual strategy conference  for the unit.

The Beijing-based firm aims to  open 50,000 square-meter home appliance experience superstores in all  first and second-tier cities in the country to realize its goal.

It will also open offline retail stores in each medium-sized city, as  well as specialty stores in fourth to sixth-tier towns. The strategy  will put JD in direct competition with the country's traditional offline  chain store giants such as Suning and Gome.

Offline  outlets do not contradict the current online retailing businesses, Yan  told Yicai Global, saying that the new offline stores will use digital  management to integrate with online units.

JD  has chosen central Chongqing municipality as the first site for its  stores, said Yang Zisheng, the person overseeing the project, adding  that the location will possess full fifth generation wireless network  coverage as well as support for smart electronics. Users can try  trending products and take part in the entertainment, family and  e-sports experience scenarios. They can scan quick response codes of  their favorite products and order on-site.

"Chongqing is just the start," said Yang. "There are plans to set up an offline business department for the stores."

The  number of in-store stock keeping units will exceed that of traditional  chain stores, and they will achieve digital operations, Yan said,  highlighting the first mover advantage of traditional players. "We will  not charge site fees for vendors," and the factories only need to  provide samples to our stores without the need to showcase them, he Yan.  One store in each major city will bring offline marketing opportunities  for new brands and products.

The locations  will change the traditional "no sales without promotions" model used by  existing players, he Yan. It will employ product engineers instead of  sales personnel to give better product experiences to users. "60 percent  of big home appliance buyers prefer to try the product," Yan said.  "They can order on site via QR code, or they can make the purchase after  going home."

JD has not set a goal in terms of  store numbers, sales amount and profit, he said, adding that rival  firms have been operating for two to three decades and it still had a  lot to learn.

The  company's plans for outlets in medium-sized cities and expansion in  towns rural areas will run parallel to the plans for the superstores.

JD  will open 5,000 smaller locations in towns and aims for gross  merchandising volume running into the hundreds of billions by 2021 while  it will also try to attract more specialist suppliers in the process,  said Liu Jun, general manager of the specialty store department. Several  major home appliance makers have supplied nearly 1,000 types of such  products to JD.Com as of this March.

The  growth of Chinese home appliance market significantly dropped in the  last year due to a weak property market among other factors. China's  domestic sales of home appliances increased by less than 10 percent to  CNY1.5 trillion (USD223.6 billion) in 2018, said Jiang Feng, chairman of  the China Household Electrical Appliances Association.

The  sector's winter urged JD to work with factories to identify users' real  needs. Yan hoped that functional home appliances will make up between  50 percent and 60 percent of sales while customer-to-manufacturer  customized products will make up the remainder. "This is where we are  heading," he told Yicai Global.

Its C2M  business has involved more than 100 brands and more than 300 SKU  products since last year's launch. JD penned C2M operation deals with  Midea and other suppliers at the Appliance & Electronics World Expo  last month.

"Product similarity in the sector  has led to heated price wars, while consumer demand is difficult to  meet," said Lu Luqun, head of JD's household appliances department,  adding that the unit will promote the C2M business through sharing of  user-specific demand data with manufacturers. The firm hopes to create  and innovate more than 10,000 SKU products and over 1,000 brands jointly  with manufacturers and users.

It will not only  partner major manufacturers in the C2M business but also work with  small factories on single product lines with output running into the  tens of thousands.

The business model will  flourish in the next year, Yan Xiaobin projected. JD is shaping its own  business into a platform where it will choose products and set prices  but the data will be open so vendors can take part in operations and use  data to communicate better with users and improve what they make in a  timely manner.