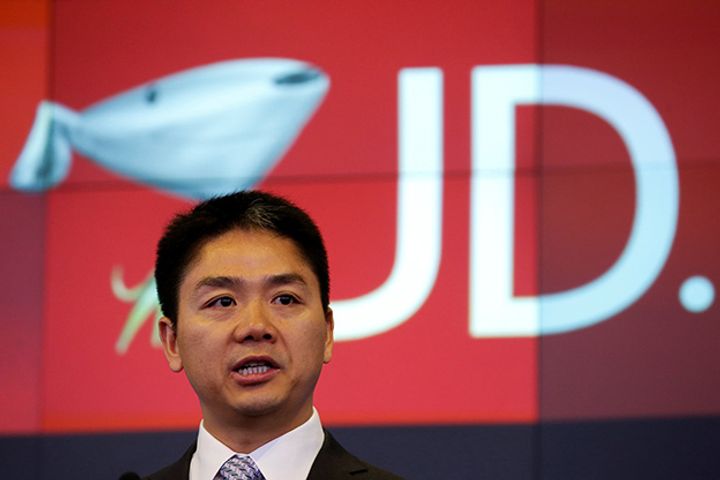 JD.Com Has No Second Fiddle to CEO Richard Liu

(Yicai Global) Sept. 4 -- The billionaire founder of China's second-biggest e-commerce company, arrested and released over the weekend for alleged sexual misconduct in the US, loves to air his views publicly, often directly swaying JD.Com's share price in the process.

US markets were closed yesterday for the Labor Day holiday. Today will be the Nasdaq-listed stock's first test after the weekend. JD.Com's shares [NASDAQ:JD] ended 1 percent higher at USD31.30 on Aug. 31.

You are what you found and Richard Liu is JD.Com. The business has been tagged with the Liu label for the past 20 years. Liu, who is also the Beijing-based company's chief executive, has stayed in firm control of nearly 80 percent of voting rights in the business he founded in 1998, and is still very much in the driver's seat.

Except for Liu, whose Chinese name is Liu Qiangdong, the company's senior executives are all professional managers these days. But he still sits behind a curtain of executives, like the wizard of Oz, micro-managing and resisting delegation. It is common knowledge that more than a decade ago he daily patrolled the office to check the working status of staff, ask about sales data, and participate in the making of every purchase and strategy decision. There is no second fiddle at JD.Com.

"His senior executive team told me that the company had a regular meeting every day," said Xu Xin, founder of Hong Kong's Capital Today. That struck Xu, who became an early investor in JD.Com. "It's not easy for such a small company to do so."

JD.Com embarked on a period of rapid development in 2009 that has propelled it to the second spot in China's e-commerce sector behind Jack Ma's Alibaba Group Holding. Liu granted his executives full financial and personnel rights and focused on "results rather than procedures." He introduced a number of professional managers and has almost never asked about a specific business since 2011.

"If I managed for 10 years and still couldn't let go, this would be a serious failure for me," Liu said back then. As the firm expanded, Liu realized that he should rely on organization and systems to manage JD.Com rather than his individual feats. For a hands-on manager like Liu, it was not an easy task to take the initiative and step away from management.

If he was not on a business trip, Liu always showed up at the firm at 8.30 a.m. to attend a daily meeting with nearly 100 executives. At the 10- to 30-minute gathering he made quick decisions on issues others raised. The meeting was so quick-fire that the atmosphere was described as "tremble-inducing."

In 2013, Liu made up his mind to temporarily leave the company and start studies in the US. He spent most of May and June that year studying abroad, and was a no-show at JD.Com's 10th anniversary promotion on June 18. After a short appearance at a company event in July 2013, he went back to the US in August and studied at Columbia University for about four months without returning to China.

"I didn't do much there, just had fun studying," Liu said. He reportedly changed his US phone number, so even senior executives could not reach him. The only means of reaching him was via email.

Breaking up is hard to do, however. One anecdote widespread in the business recounts how at one morning meeting a staffer announced that a new product would be coming out. Liu's voice suddenly erupted over the conference call phone. Without saying 'hello,' he said straight out that some details still needed ironing out and that these changes had to be immediately implemented before the product's debut. Everyone present was startled.

JD.Com listed on the Nasdaq in May 2014. Liu relinquished the role of CEO and continued to delegate power to lower down. The company's revenue fell in the second quarter of 2016, and its share price dropped to USD19.51, the lowest since listing. It was then that Liu returned to turn things around.

Sometimes Liu even checks the firm's most trivial details. He asks at the morning meeting, for example, whether the gifts are ready for women staff for International Working Women's Day on March 8, or whether warehouses have been checked since South China gets so much rain, and urges staff to inspect drains before the monsoon season.

Liu has always been a workaholic. He enjoys hard work and spent an average of 16 hours a day at it. Lying on a beach sunbathing is torture, Liu told CNBC while in the US.

The businessman made his Davos debut in January and talked about retirement for the first time in a dialog with David Rubinstein, founder of the Carlyle Group, one of the world's largest private equity firms.

"I hope my employees will say, 'He is a good man,' when I retire." Liu has said he will not do so until he is 65. He is now 45. If JD.Com's business goes well, Liu should continue to rule the roost for a long time to come, particularly as he seems to have beaten the US charges and is now back in China, media reports stated yesterday.