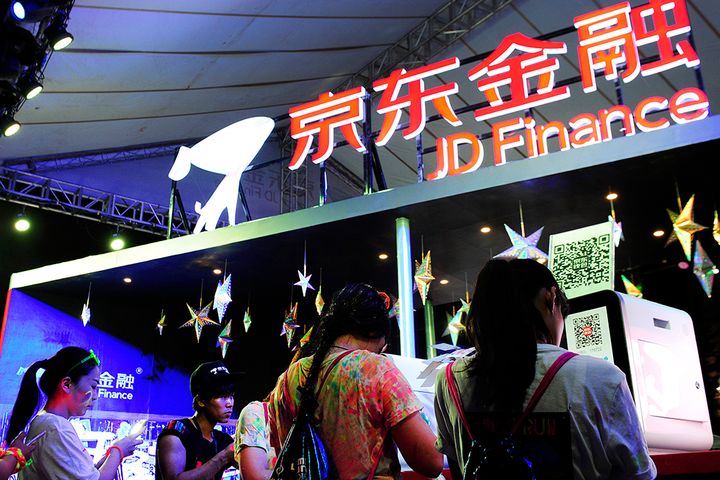 (Yicai Global) Aug. 16 -- Jingdong Finance, formerly an internet finance subsidiary of JD.Com Inc. [NASDAQ:JD], has become a completely independent entity and will be removed from the public company's consolidated financial statements, China's e-commerce behemoth said in its second quarter financial report. A light-asset model is the direction of business transformation at Jingdong Finance, and the new spin-off will strategically focus on exporting fintech to traditional financial institutions, several executives at the company told Yicai Global during an interview.

After the spin-off, Jingdong Finance will gain greater autonomy, and as was the case with Alipay after its separation from Alibaba Group, its status as an independent entity will help Jingdong Finance get financial licenses, and float its shares on the capital market in future, a market insider pointed out.

"Going forward, light-asset consumer finance will be the direction for business transformation at the company," Ou disclosed. Jingdong Finance will not own assets itself, but banks will. Instead, it will provide risk control and other relevant management services covering the entire loan lifecycle, including post-loan management.

Ou believes light asset is the future trend for fintech businesses. Since it started independent operation in October 2013, the company has gradually shifted away from the proprietary business model toward a light-asset fintech service provider, which marked an important milestone in its development history.

Jingdong Finance will prioritize financial license applications. As a defensive measure, this will put it in a relatively safe position in the market, Ou continued. The company has kept its non-performing loan rate at a very low level, far below the industry average.

Apart from consumer finance, fintech has been established as another key strategic business at the company, with a dedicated fintech division set up in the second half of last year. The firm's top priority now is to enhance its technical capabilities following the light-asset approach, and export more technical capacity to external organizations, he noted.

Its partners include banks and securities, insurance and asset management companies, said Xie Jinsheng, fintech general manager at Jingdong Finance, adding that banks will take precedence over other organizations, given the large number of banks in the country and the highly fragmented banking market.

The current business model involves Jingdong Finance and banks collaboratively developing financial services and products, and each side receiving its own share of profits generated by the final products, Xie noted. During the process, the company provides its partners with differentiated services based on their business scale, needs and strengths. Partnerships take different forms such as technology integration, scenario fusion and business ecosystem cooperation, and the ultimate goal is to improve efficiency and reduce costs.

Although the firm is seeking cooperation with commercial banks in direct banking businesses, Yicai Global reporter learned, it does not mean that it wants to set up a direct bank with traditional financial institutions.

Jingdong Finance has been collaborating with traditional banks in direct banking services, but it "might be most aptly defined as a digital financial bank model," Xie opined.