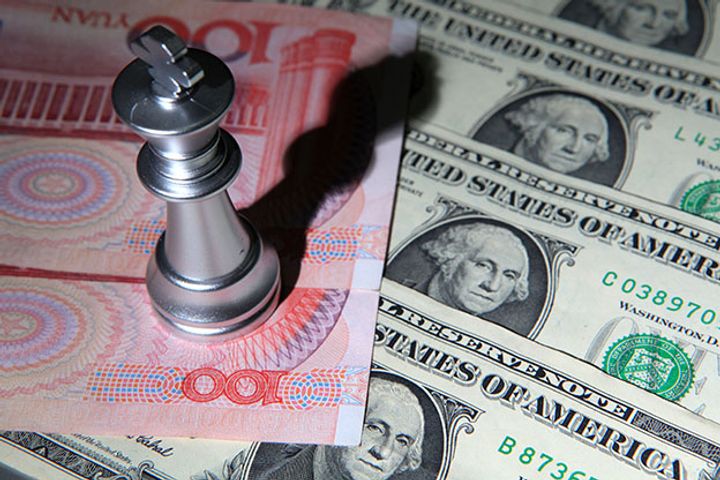 (Yicai Global) Aug. 2 -- China's currency has weakened from the psychological upper level of 6.7 versus the US dollar, sliding past the 6.8 mark over the past months, while market analysts say that the yuan's long-term fundamentals are in order.

"There is a huge difference between this round of the yuan's exchange rate depreciation and that after the '811' exchange rate reform," said Guan Tao, the former director at the State Administration of Foreign Exchange said in an exclusive interview with Yicai Global yesterday.

The central parity rate of the yuan against the US dollar fell by 128 basis points to 6.8293 yesterday, hitting a new low since May 31 last year. The yuan has lost about 7.2 percent of value versus the US dollar in the last three months.

Guan referred to the deregulation mayhem after August 11 in 2015, when the yuan came close to dropping below the critical line of 7 against the US dollar, which would have meant that the value of China's foreign exchange reserves could slump below USD3 trillion.

"China then faced a heavy downward pressure on the domestic economy. Internationally, the yuan slump was attributable to financial market vibrations, the Federal Reserve's rate hikes, a continuously stronger dollar, the breakout of a series of black swan events in Europe, and the increased risk aversion." Whereas this wave of devaluation is involved in a quite different context, in which foreign exchange reserves and market expectations are relatively stable and the central bank has also refrained from direct intervention, Guan added.

Chinese financial officials have reiterated in the past months that this round of depreciation pressures are mainly triggered by the strong US dollar. China has reported weaker economic growth than the US this year, and both countries have adopted quite opposite monetary policies. The Fed rolled out the second interest rate hike in June while China has eased its monetary policy for three months in a row until that month. Global geopolitical unrest and intensified trade conflicts were also conducive to a bullish dollar as many chose it as a safe-haven currency.

The dollar underwent significant gains in value against currencies in the emerging markets in May and June, said Zhang Ming, director of world economics department at the Chinese Academy of Social Sciences. "US dollar index rose strongly 7 percent in the four months from February to June," Robin Xing, Chief China Economist of Morgan Stanley told Yicai Global.

China has sound fundamentals and the government has the ability to maintain a stable market after the difficulties last year, Guan said, adding that the exchange rate market will be fine if there is no one-way expectation of continuous strengthening or panicked stock selloff.

The floating exchange rate means swings of depreciation and appreciation, both of which have effects for two sides. Thus, analysts said that the market should bear with the short-term fluctuations. A generally strong economy will send the yuan onto its way to appreciate.