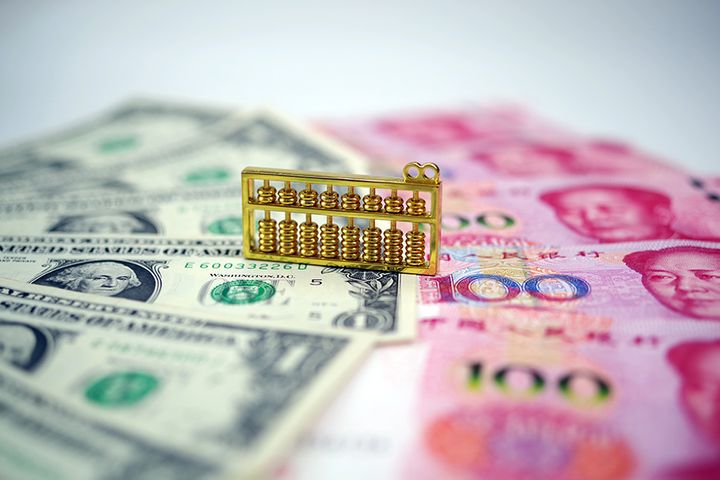 (Yicai Global) Aug. 5 -- As the Chinese yuan weakened to its lowest against the US dollar in 11 years today, pushing through the psychological barrier of 7, Yicai Global collected up views on the exchange rate from a number of chief economists at Chinese financial institutions.

Reacting to the yuan's retreat, several of the economists interviewed said that moderate exchange rate fluctuations would help strengthen the resilience of China's economic growth.

In a statement, the nation's central bank said it "has the experience, confidence and capability of keeping the yuan's exchange rate basically stable at a reasonable and balanced level." The People's Bank of China attributed the weaker redback to factors such as trade unilateralism and protectionist measures, as well as the expectation of additional US import tariffs on Chinese goods.

The fall below 7 was an adjustment driven by fundamentals. The Chinese yuan exchange rate has a self-stabilizing capacity. Through a series of two-way fluctuations, the exchange rate's new bottom line will gradually emerge.

If the China-US trade tension is long term but not extreme, the exchange rate will hopefully remain stable.

China's central bank will hold to two principles. First, it will focus on bringing the depreciation within a reasonable range while continuously curbing speculation in shorting the yuan. It will also promote a stable and healthy adjustment of the exchange rate towards a balanced state.

The economic fundamentals will not let the yuan plunge versus the US dollar after breaking the 7-level. First, the US Federal Reserve started a cycle of cutting interest rates at the end of July, which helped stabilize the yuan against the dollar.

Second, the recent decline in the US dollar index has helped stabilize the exchange rate. Judging from the short-term factors affecting the central parity of the yuan against the dollar, the pressure from the domestic foreign exchange market is the main cause for it falling beyond 7.

In the short term, the yuan will remain stable against the US dollar at around 7.

This fall past 7 means that the yuan exchange rate level, especially the central parity rate, has been exposed more to the market mechanism, reflecting market supply and demand. This shows that the central bank's decision-making on the exchange rate is aligned more with the market and less with intervention.

Securing employment is another important concern for China in addition to helping companies resolve short-term difficulties. Therefore, China will adopt more flexible measures to cope with uncertainties. This flexibility will mean that the PBOC will ease its interventions and comply with market rules.

China has several policy tools at hand considering the current economic situation. It has enough forex reserves, closed capital projects, and many administrative measures to choose from.

The fall of the exchange rate past 7 is a market reaction to current outside conditions and escalating China-US trade tensions. We think the fluctuation range is more suitable within 7.1. Keeping the yuan exchange rate flexible is the top priority now. Only by doing this can China secure a more flexible economy, promote exports and imports and suppress asset bubbles.

This also shows that the central bank has a more tolerant attitude towards the exchange rate. It allows fluctuations in a broader range. The exchange rate will bear certain pressure in the short term as the outlook for China-US trade talks is uncertain and the global economy is changing. But it will probably remain stable in the medium to long term as China's core drivers for economic growth do not change.

A long-term depreciation of the yuan against the US dollar is groundless judging by economic fundamentals. The economy is growing steadily as a whole, with the growth structure being optimized. China's economic growth has stayed at the top among major global markets, which is an important support for the yuan's long-term outlook.

Overseas capital has entered China's stock and bond markets through various channels over the past two years, which also reflects their optimism about the long-term growth trend of the country's economy.

On the other hand, after the US Federal Reserve cut interest rates, other countries have adopted loose monetary policies and the world has ushered in a wave of interest rate cuts. But China did not follow this trend. It adopted an appropriate monetary policy according to its own situation.

From the perspective of monetary policy, the yuan does not have a basis for rapid depreciation. In addition, China has enough forex reserves, still up to more than USD3 trillion, which provides strong support for the currency.

The yuan's flexibility will increase with the improvement of the exchange rate formation mechanism and an increasing degree of marketization. So, we do not need to focus on the fall too much.

China's economy is running smoothly. Its balance of payments is balanced, financial risks are controllable, and the exchange rate index is stable. On the other hand, the US dollar index could still fall further.

The depreciation of the yuan against the US dollar does not have much ground. The exchange rate will continue to fluctuate within a reasonable range.

China-US trade tensions continue to greatly increase market uncertainty, and the depreciation of the yuan will put some pressure on the price of yuan-denominated assets. The pressure on the exchange rate also shows market expectations for a loose monetary policy.