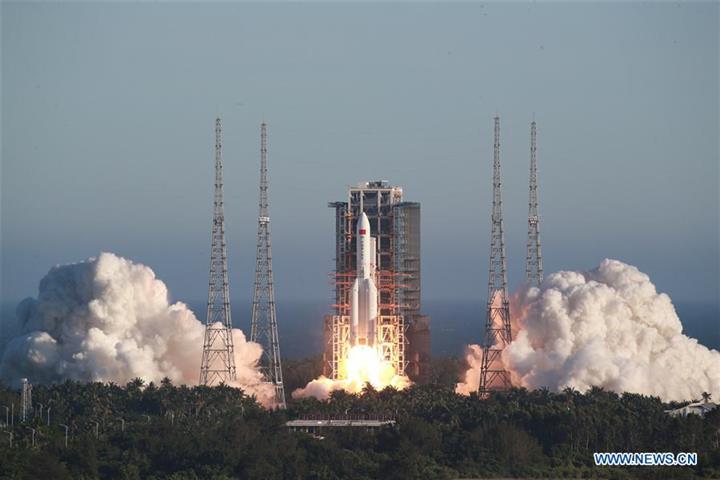 The Long March-5B was specially developed to launch the space station modules, said Wang Jue, chief director of the rocket development team at the China Academy of Launch Vehicle Technology (CALT) under the China Aerospace Science and Technology Corporation.

The rocket uses environment-friendly fuel, including liquid hydrogen, liquid oxygen and kerosene. It has a takeoff mass of about 849 tonnes and a takeoff thrust of about 1,078 tonnes.

The Long March-5 rocket will be mainly used for launching large satellites to high-Earth orbit and deep-space probes such as the Chang'e-5 lunar probe and the Mars probe. The Long March-5B rocket will mostly carry capsules of China's space station and large spacecraft to low-Earth orbit, according to CALT.

With the largest payload capacity of China's current carrier rockets, the Long March-5B enables the launch of large spacecraft. For instance, each module of China's space station will be over 20 tonnes, and can only be carried into space by the new rocket.

The Long March-5B has the largest fairing of China's carrier rockets, specially designed to carry the space station modules. A rotary separation scheme ensures the fairing can separate from the payloads safely in space.

The development of the new carrier rocket also helps lay the foundation for the research and development of China's heavy-lift launch vehicle, Li added.

This year will see another two flights of China's large carrier rocket. The Long March-5 is expected to launch China's first Mars probe in July, and the Chang'e-5 lunar probe at the end of 2020 to collect moon samples and bring them back to Earth.