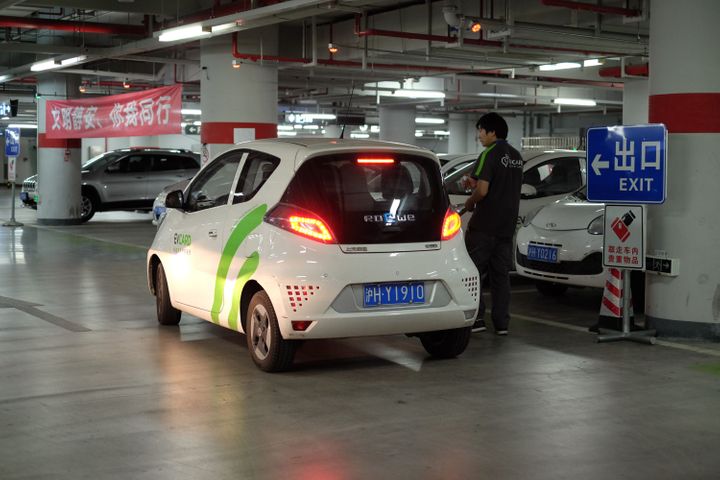 (Yicai Global) July 11 -- The burgeoning shared bike industry has fueled the engine of sharing economy, bringing the silent sharing car back under the spotlight. Different from the shared bike market featured by robust expansion, the car-sharing sector, which prioritizes funds, operation and technical threshold, has been gaining momentum before finally making mark.

"The more investors and investments there are, the more promising the whole industry will be, and the closer we will move toward the period of opportunity. Today, the car-sharing industry is at a stage to increase the size of the 'pie' supported by clustered development," said Evcard, a car-sharing company, General Manager Cao Guangyu in an exclusive interview with Yicai Global. He also pointed out that the time-share releasing of cars is still confined to "conducting basic site layout, raising the vehicle numbers and continually cultivating the user habit."

The concept of car time-division renting is in fact nothing new, which seems likely to be a mismatch with its growth trend. If calculated from the internet vehicle sharing platform Zipcar -- the largest and most successful time-share releasing provider in the US, the concept has existed for nearly 20 years in the US and Europe.

Car time-share releasing gained a significant traction in China in 2015 or so. In May 2016, Shanghai Automotive Industry Corporation and Shanghai International Automobile City established a joint venture -- Global Carsharing, whose car-sharing brand Evcard started to foray into the domestic market. During the same period, its counterparts including Togo, Gofun Travel backed by Beijing Shouai (Group) Co., and Car2Share under European carmaker Daimler and Bage travel have already come on the scene.

As opposed to an input cost ranging from several hundred yuan to several thousand yuan for each shared bike, investments into the vehicle hardware couldn't be more massive. Take the above-mentioned Evcard, for instance. Some eight car types are available in the current platform, including Roewe E50, Chery EQ, BAIC EV160, Zotye 1E, and BMW i3. It is known that buying a BAIC EV160 costs about CNY80,000 (USD11,700), while a BMW i3 is priced at CNY400,000 or so at the market. At the same time, each car will be accompanied by an operation-level commercial insurance worth more than CNY10,000.

Another major investment lies in the construction of "sites." Currently, the bulk of shared cars need to be placed at the fixed parking sites, equipped with power poles. On the contrary, shared bikes allow for arbitrary parking. The operation model integrating billing by minute, self-service renting, flexible dropping-off and combined charging pole-site pose even more demanding requirements for the construction density and operation efficiency of parking sites.

In most cases, the car time-share releasing parking spaces feature payments to the commercial parking lots or the government, based on long-term leasing agreements or agreements reached with the local government. Pan Chunming, operating manager of Evcard in Shanghai, said the company's parking lots are backed by property management companies of business buildings, higher institutions, hospitals, hotels, government organs as well as traffic hubs. Upon use access to a certain number of parking lots, charging stations are installed for the borrowing and return of cars.

However, what is even harder than the building of parking lots is negotiations with different parking lot proprietors. In terms of site selection, operators of car time-share releasing tend to evaluate the density and range of commercial and residential blocks. At present, the likes of central business districts (CBD), colleges and universities, airports and other traffic hubs are known for high-frequency usage.

Among those regions, acquiring parking spaces located at the business circle of a prime area poses the biggest hurdle, with operators shrinking back at the thought of the monthly parking fees to the tune of CNY3,000 to CNY4,000. Even worse, these parking lots are witnessing a continuous price hike with the influx of share-time releasing firms, as evidenced by a whopping renting fee of more than CNY1,000 for the parking lot in some prime areas.

Nevertheless, those prime areas are precisely in huge demand, rendering an imbalanced situation concerning site allocation. Many suburbs with a large stationing of sites are vacant for long time, while the sought-after regions are plagued by insufficient parking sites and car-seeking difficulties.