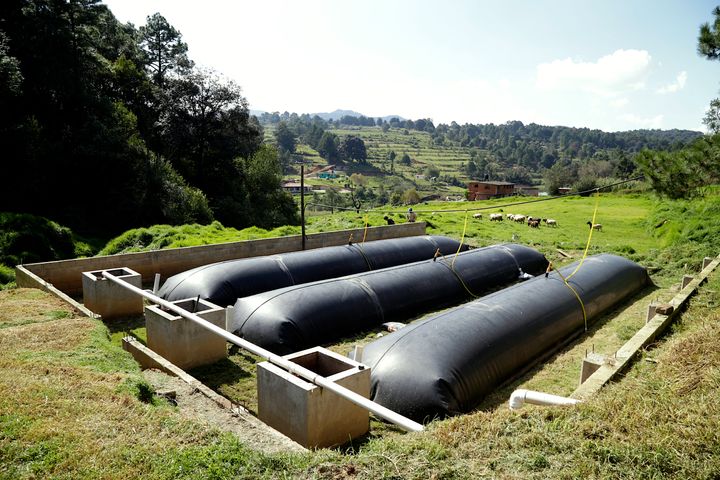 (Yicai Global) Oct. 27 -- Livestock farming is the fastest growing agricultural sector in the world, employing some 1.3 billion people. Yet in its highly influential 2016 report, the Food and Agriculture Organization of the United Nations (FAO) claimed that agriculture, forestry and land use are responsible for 21 percent of the world's greenhouse gas emissions.

In the same report, FAO stated that adopting sustainable practices in livestock farming could reduce up to 41 percent of methane gas emissions. An example would be using biodigesters, which can convert livestock manure into biogas and organic fertilizer.

This is the concept behind Sistema Biobolsa, a business based in Mexico City and founded in 2009 by Alex Eaton and Camilo Pagés. "I grew up on a small farm in the U.S. and realized that although small farmers provide 80 percent of food on a global level, they lack access to technology, training and fair credit," explained CEO Eaton. "I designed biodigesters because in the countryside, there's an excess of organic waste that can be converted into a reliable source of energy." His product helps save—and helps farmers save money.

A biodigester is a sort of big black bag made from a dense, impervious material that is set in a long ditch dug in the ground. It is fed daily with organic farm waste. Inside the reactor, the manure mixes with water, creating an oxygen-free environment where the same bacteria that are active in cows' or pigs' stomachs thrive.

The bacteria feeds on the waste, generating a renewable methane-rich biogas that can be piped directly to the farmer's stove or hot water heater, or used in motors, pumps or generators. The process also produces biol, an organic fertilizer that can replace chemical products, increasing crop productivity while also improving soil quality.

The economic benefits are considerable. "A small family typically spends around 300 pesos (US$ 17) a month on energy and another 300 on fertilizer, and all these costs can be reduced with the use of a biodigester," Eaton said. "The savings for a larger farm could be thousands of pesos a month."

What's more, once farmers have met their own energy needs, they can sell any surplus, generating an additional source of income for their families. Clients have also noticed improved respiratory health as they turn away from traditional firewood.

The manure produced by two cows can meet the needs of a single-family home, while the manure of 200 cows can produce enough renewable energy to be introduced into a community's electricity network. The systems are priced between 10,000 and 500,000 pesos depending on the size and can be bought through microcredit from Kiva, a platform that aims to lower financial barriers. The system provides a return on investment within eight to 16 months and has a life expectancy of about 30 years.

Farmer and Sistema Biobolsa client Nicolas Castillo confirmed that the system saves him money. "In this economy, it helps to not have to buy liquid gas," he said. It also makes it possible him and his wife to live in peace with their surroundings, knowing that their cows' manure is not polluting rivers or contributing to greenhouse gas emissions. "We try to use everything ecologically so that we are in harmony with nature."

With offices in Mexico, Colombia, Nicaragua and Kenya, the company has installed 3,200 systems globally and treated more than 4 million tons of waste. "We've exported to 16 countries including the United States, Central America and South America," Eaton said.

In five years, the company hopes to be installing systems at a rate of more than 10,000 a year in Mexico and up to 50,000 worldwide. To achieve this, Sistema Biobolsa is focusing on improving their distribution network and on forming alliances with government bodies and business leaders in the energy and agricultural sector in Mexico, Central America and the Caribbean.

"This is Mexican technology, and it has been recognized as the best of its kind," said Eaton. "We are known internationally as leaders in our field, which allows us to grow and export, establishing Mexico's reputation as a world-class producer of this type of technology."