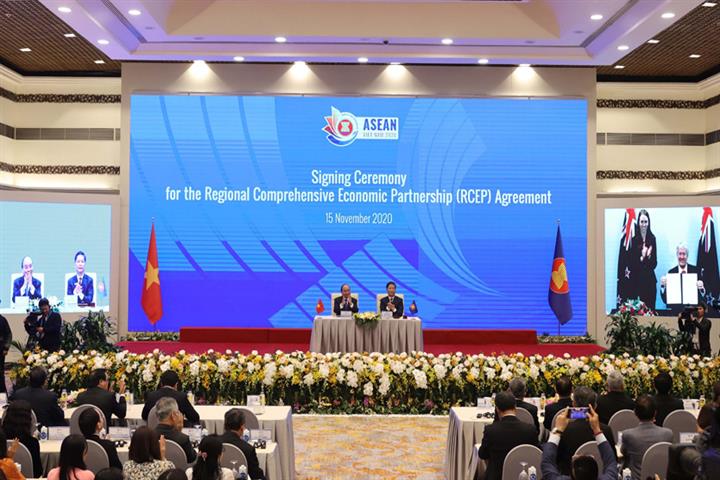 Fifteen nations -- China, Japan, South Korea, Australia, New Zealand and the 10 countries in the Association of Southeast Asian Nations -- penned the free trade deal after eight years of negotiations. The RCEP creates the world's largest-ever trade bloc encompassing almost 2.3 billion people and about a third of the global economy, according to China’s commerce ministry.

Its signatories will adopt unified trade and investment rules to locate their industrial chains in places with the biggest advantages, Yuan Bo, deputy director at the Asian studies institute of the Chinese Academy of International Trade and Economic Cooperation, said in an interview with Yicai Global.

The pact should also help stabilize China’s foreign trade and investment. For investors, China’s manufacturing system has a comprehensive industrial chain, which brings the country clear advantages in costs and competitiveness, Yuan said.

The favor of neighbors could help fill a void. “We may promote [trade and investment cooperation] in certain regions when the European and American markets are unstable,” Yuan said. “Asian countries can expand each others' domestic markets.”

Amid the Covid-19 pandemic, the ASEAN has been increasing its business dealings with China to become its largest trading partner this year, while China's trade with the European Union and the United States has declined.

The RCEP should greatly reduce tariffs and rules to facilitate trade, which could have a strong effect on stabilizing regional supply chains, Shen Minghui, secretary-general of the Center for APEC and East Asian Cooperation under the Chinese Academy of Social Sciences, told Yicai Global.

Yuan further explained the changes. Imports and exports of intermediate or manufactured goods will be exempted from tariffs, and the level of market access will be higher than among World Trade Organization members in the areas of services and investment, she said. “Policy uncertainty will also be reduced to some extent,” Yuan added.

Investors should not expect any big changes to take place overnight, however. The RCEP will reduce costs and barriers to trade and investment among member countries, which should make many firms willing to locate their entire industrial chains in this area, according to Yuan. But companies need strong domestic markets to support such big shifts in their value chains, she added.