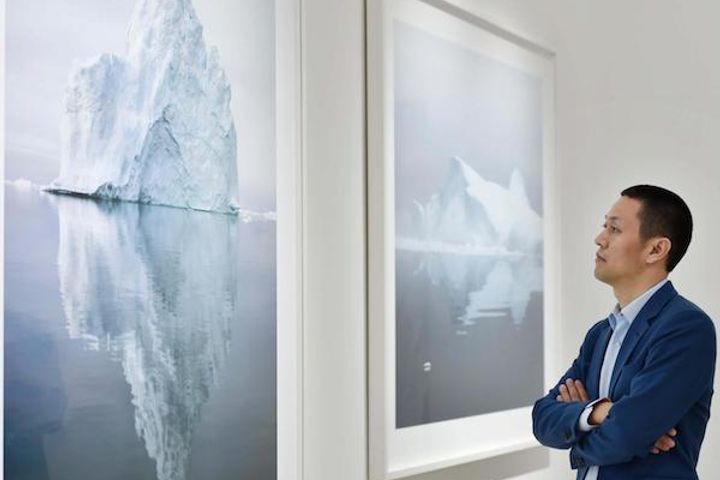 (Yicai Global) June 20 -- The internet vehicle manufacturing industry is mired in a quandary of constant expectations and doubts. Li Bin, founder of vehicle maker NIO, is no exception. The slower-than-expected delivery of the company's first mass-produced SUV, the NIO ES8, has once again exposed Li to the brunt of public misgivings and criticism.

"All the problems that NIO faces right now have been well anticipated. At the very beginning when we started to plan our carmaking business, we were clear that we should set an ambitious aim, like the goal of scaling the 8,848-meter Mount Everest, not just conquering small peaks. Therefore, we have always known how difficult it is to make vehicles," Li said in an exclusive interview with Yicai Global on June 15.

He chose to make vehicles after thorough consideration, rather than on the spur of the moment, he stressed.

Li now focuses 95 percent of his energy on NIO and basically works seven days a week, he confided. He occasionally takes time off on Sunday to spend time with his family, but even then, when his kid takes a nap at noon, Li often sneaks away from home to transact business.

Recent market rumors have held that NIO's factory is now still idle, and that the delivery of its first mass-produced vehicle, once scheduled for late April at the earliest, may be postponed. NIO delivered 10 ES8 vehicles to its employees on May 31, but the public view is that this was just a desperate attempt by the firm's employees to save their boss the embarrassment of breaking his promise. NIO is delivering vehicles at a snail's pace, observers have remarked.

As a cooperating partner of Li, JAC chairman An Jing vigorously defends NIO. "Delayed delivery is not uncommon among traditional carmakers. Even Volkswagen has this problem, too," he said with a touch of asperity.

Shen Feng, NIO's VP in charge of quality, also voiced his peeves to media. "This is an all-new factory, and ES8 is an all-new product that includes many novel techniques. Therefore, there are certainly many challenges in production. This is true with all enterprises."

Shen, who once worked for traditional automobile enterprises, said that it took less than three years for NIO and JAC to jointly build a new factory and launch it into production, which would have been impossible for any traditional auto firm. It usually takes three to five years for conventional car companies just to turn out a new vehicle model.

Li easily allayed various doubts by saying less and doing more. He personally escorted media for the first time to inspect the Jianghuai-NIO manufacturing base in Hefei, capital of China's eastern Anhui province on June 15. The large new plant with extensive use of robots amply demonstrates it plans to make 841 vehicles and has produced 229 already this month.

There is a deviation in the targeted delivery time for ES8, Li admitted, but indicated that the ramp up to mass production is a long process for all automakers. Unlike traditional carmakers, Nio applies a system of reservations. After one is booked, customers wait for their delivery from among the next batch made.

"The error may be slightly larger at the starting point but will narrow later." Li hopes that this plant will be fully operational in late August. Working overtime, the plant can achieve a monthly output of 5,000 vehicles, and it will strive to complete the delivery of 10,000 NIO ES8 vehicles by the end of September.

Despite all the current difficulties, the challenge for Nio will be ten times the previous ones after the delivery of the new vehicles, Li predicts.

A new car company needs to standardize its software, hardware and services, integrate them with one other, and keep upgrading and iterating, Li advised, just as in the manner of a conductor leading a very large orchestra in performing a harmonious symphony, which is very difficult, above all in the service sector.

Carmaking is a technology- and capital-intensive investment and takes a long time to reap a return, and a company without CNY20 billion simply cannot make a car, said both Li and He Xiaopeng, Chairman of Xiaopeng Motors.

NIO has also sited its NIO House showrooms in prime spots in Beijing, Shanghai and Guangzhou, and these spaces are correspondingly pricey. The company's first user center, located in Oriental Plaza, No. 1 Chang'an Avenue, Beijing, occupies an area of 3,000 square meters, the rent for which an industry insider estimated will run to about CNY80 million per year.

To alleviate concerns about electric cars' mileage, NIO has launched its NIO Power charging system suite that includes charging piles, swapping stations, charging vehicles and a supercharger network that is integrated into the State Grid. NIO will build 1,100 swapping stations nationwide by 2020 to form a service network within a radius of three kilometers, per Li's planning.

The swapping station mode of pre-charging spare batteries to replace empty ones did not originate with NIO, and BAIC BJEV tried the model but has thus far not succeeded. This approach imposes very high requirements in infrastructure investment in the initial period and operation and management in the later period and devours both money and labor as a result.

With everything requiring huge investments, just how much money does NIO, which has yet to turn a profit, need to sustain it? Li has never revealed the firm's financing and has responded to rumors of the company's IPO in the US in September with stony silence.

He has only ever conceded that NIO has 56 investors and is able to raise sufficient funds. The main investors are Tencent founder Pony Ma, Richard Liu, originator of JD.com, Xiaomi creator Lei Jun, Zhang Lei from Hillhouse Capital, Li Xiang from CHJ Automotive and Yu Minhong, chairman of New Oriental Education and Technology Group.

When they invested in NIO, Li made no promises as to when the company would yield a profit and said carmaking has risks and investment demands circumspection, telling them to exercise their own judgment as to whether NIO holds forth opportunities, he said.