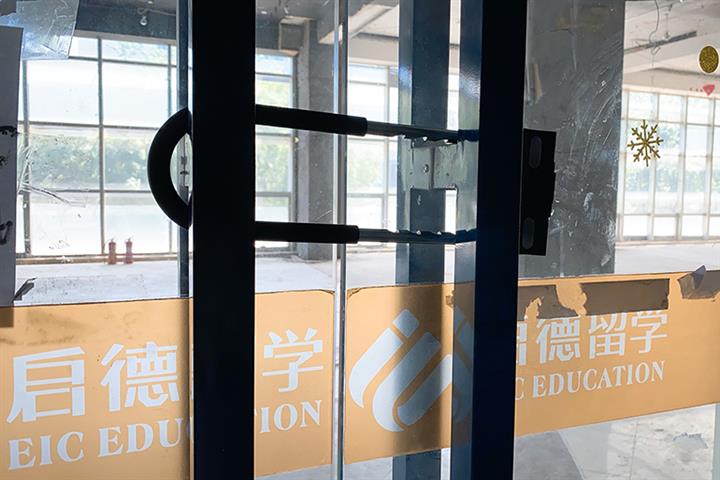 ‘Off-Campus Training Center of the Universe’ Stands Empty in Beijing

(Yicai Global) June 23 -- Once dubbed the ‘off-campus training center of the universe,’ Beijing Huangzhuang is a shadow of its former self as the impact of the pandemic rumbles on and China ramps up supervision of off-campus tutoring.

The buildings, where local education institutions are clustered, are almost empty now, a Yicai Global reporter recently found on a visit.

Huangzhuang, located in Beijing’s Haidian district, has always been seen as a bellwether of the private education and training sector because it is adjacent to many top middle schools in the capital.

Well-known institutions, including Xueersi, Gaosi Education and OneSmart Education, have set up demonstration teaching units in Huangzhuang, with many unknown small- and medium-sized institutions also moving in.

Yicai Global visited three buildings in the main area of Huangzhuang and discovered that the education and training institutions there had not come back to work since the emergency suspension of classes due to a coronavirus outbreak in January. Most have only a small number of staff on duty, while some have sealed their doors or simply left.

Beijing’s Daxing district reported sporadic Covid-19 cases in January, forcing the capital to suspend all face-to-face training activities in the city. Subsequently, China began placing greater controls on off-campus training institutions. Since March, all institutions applying to restart classes in Beijing have been subject to joint inspections by various departments.

As of June 12, Beijing authorities had approved a total of 83 teaching sites to resume offline training, but none of them is in the three buildings at Huangzhuang, according to publicly available information.

Another told Yicai Global that although there are many education and training institutions in Huangzhuang, not many are qualified. Most of them hold consultancy licenses rather than permits to teach privately. Those without formal documents are not even qualified to submit applications, he said.

Teachers in the education and training sector are also feeling the pressure of supervision. There have been reports of layoffs at many organizations.

“My colleagues were fired one after another following the Spring Festival, either because they didn’t have teaching credentials, or because their whole department was laid off,” a teacher at a well-known organization told Yicai Global.

On May 21, China’s central government proposed at a meeting that it would seriously investigate and deal with unqualified off-campus training institutions. Following that authorities all over the country introduced a series of regulatory measures. For instance, Beijing’s Haidian district now explicitly requires prepayments collected by off-campus training institutions to be supervised by a third-party agency.

On June 15, the Ministry of Education set up a new department to regulate off-campus education and training institutions. According to industry rumors, its establishment meant that stricter supervision policies were imminent, including a blanket ban on extracurricular tutoring during the upcoming summer vacation.

Yicai Global learned from one training organization that the ban has not been communicated as yet.