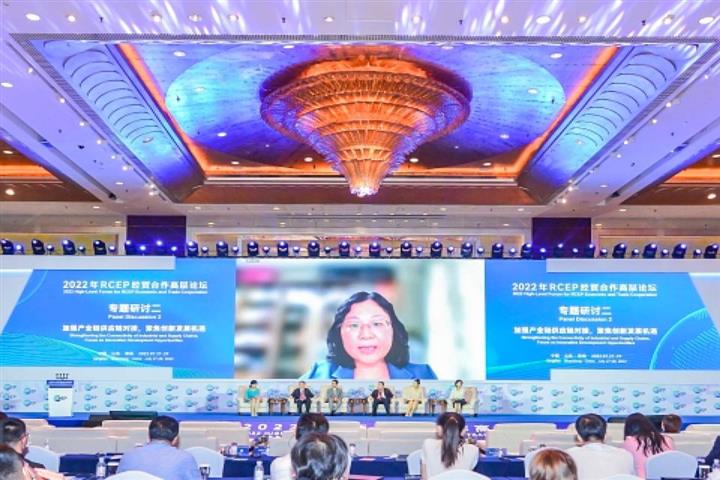 (Yicai Global) July 29 -- The member countries of the world’s largest free trade pact, which encompasses the 10 Southeast Asian nations as well as China, Japan, Korea, Australia and New Zealand and that came into effect on Jan. 1, have become a global production center and there is potential for further growth, a researcher at the Chinese Academy of International Trade and Economic Cooperation said recently.

Members of the Regional Comprehensive Economic Partnership region have established close ties in industrial and supply chains, and have linked arms in globalization, said Yuan Bo, who is deputy director of the Academy’s Institute of Asian Studies.

Intraregional trade inched up largely thanks to China. China’s role as a major trading partner in the region continued to improve during the pandemic. The trading volume between China and RCEP members grew 5.6 percent in the first half from a year earlier, according to the latest data from the General Administration of Customs.

Since the RCEP came into force, China has waived CNY520 million worth of tariffs on imported goods amounting to nearly CNY23.9 billion (USD3.5 billion), according to customs data. The main items are steel, plastics and plastic products, as well as machinery and components.

Member countries are carrying out cross-border integration and overall planning of resources according to their respective advantages, Yuan said. For example, China boasts a complete industrial system, Japan and South Korea have high-end technologies and cutting-edge research and development, the ASEAN nations has cost advantages in manufacturing and low-end service industries, and Australia and New Zealand have strengths in resources, raw materials and high-end service industries.