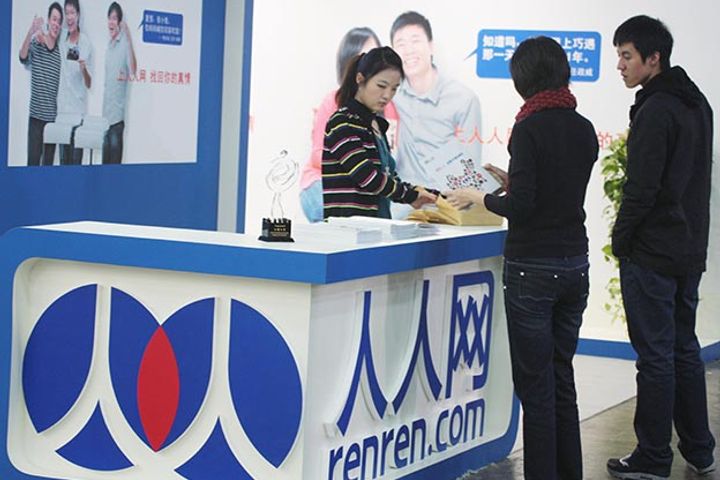 (Yicai Global) May 15 -- A group of investors in Chinese social network Renren Inc. [NYSE: RENN] have filed a complaint with the US Securities and Exchange Commission aimed at stopping the company from selling assets to a private entity called Oak Pacific Investment controlled by company Chief Executive Joseph Chen and Japan's Softbank Group Corp.

Of the assets to be sold, the most important is a near-15 percent stake in fast-growing online lender Social Finance (SoFi), which Renren plans to sell next month, online news outlet Sina reported.

SoFi's latest round of financing valued it at USD4.3 billion. Based on this valuation, 15 percent of the stake should be worth more than USD600 million, but Renren currently values it at only around half of this price.

The proceeds from the asset sale will be returned to Renren's shareholders. Some of the large investors -- notably Softbank, which owns 39 percent of Renren and is also a large shareholder in SoFi -- will get the opportunity to buy shares in OPI.

"You cannot sell assets to yourself at a low price," said Leo Liao, chief investment officer at Shanghai-based Prusage Asset Management, who said he had written to the SEC to complain about the move.

Renren previously valued its SoFi shares at around USD300 million. At this price, SoFi's valuation is about USD4 billion. Renren also sold a portion of shares in SoFi for USD920 million in April last year. Based on that price, SoFi should be valued at USD6.3 billion.

The Financial Times reported last year that SoFi had received an indicative offer to buy the company for USD6 billion and decided it was insufficient.

"Many small shareholders have now shown anxiety. They are trying to block the deal as much as possible," Liao added. "Many shareholders from China have become more active. If such a precedent is set, no one will invest in any company in the future. All shareholder protection and shareholder rights will be abandoned."

The SEC, Softbank and SoFi all declined to comment on this issue and Chen also did not respond to requests for comment.