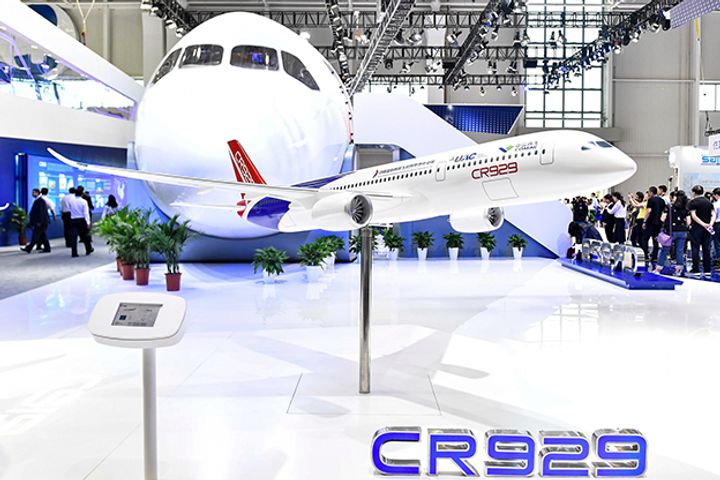 (Yicai Global) Feb. 18 -- Russian state-owned conglomerate Rostec, which is currently building a long-haul plane with a Chinese firm, wants the two country's to design the aircraft's engine together and help crack a duopoly in the wide-body jet engine market.

The Moscow-based firm, whose main sectors include technology and defense, has already begun work on the design and will develop the 35 ton engine whether China joins in with the research or not, Rostec Chief Executive Sergey Chemezove told Yicai Global.

"We believe engine production is one of the most promising directions for our company," he said. "UEC [United Engine] is mainly responsible for this business area -- the unit integrates the combined talent and productivity of Russia's engine manufacturing industry."

Engines are one of the most technically complex parts of a plane to build, and generally make up around a quarter to 30 percent of jet's costs. Only two manufacturers worldwide, General Electric and Rolls-Royce, are capable of producing engines fit for wide-body civil aircraft -- like the Airbus 330 and Boeing 787 -- and China and Russia both want to disrupt their market power.

Rostec has already built a 14 ton engine and plans to use the technology for its domestically made civilian plane, the MS-21, Chemezove said.

The new engine Rostec plans to build is intended for the wide-body CR929, which is being developed by China Commercial Aircraft and Russia United Airline Manufacturing Group with a projected delivery date of between 2025 and 2027.

Rostec has seven agreements in place with state-backed Chinese firms, covering cooperation in civil aviation, dual-use technologies and the development of a heavy-duty civilian helicopter, among other fields, Chemezove said. It is also developing aerospace and electronic equipment with China Aerospace Science and Technology Group and China Aerospace Science and Industry, he added.

Rostec has more than 700 units, including 11 military holding companies, and gathered almost all of its income from defense products until recently. In 2015, the firm pledged to increase its revenue from civilian products to 50 percent of all income by 2025, with a particular focus on engine manufacturing, oil and gas equipment, medical technology, radio electronics and other high-tech sectors.

It now wants to extend its cooperation with China and is open to the world's second-largest economy investing in new projects, Chemezov said, adding that Russia's weapons, aviation, automotive, industrial, electronics, robotics, medical and new materials industries are all attractive to investors.

Rostec is already in talks with some major Chinese firms, investment funds and banks, he added.