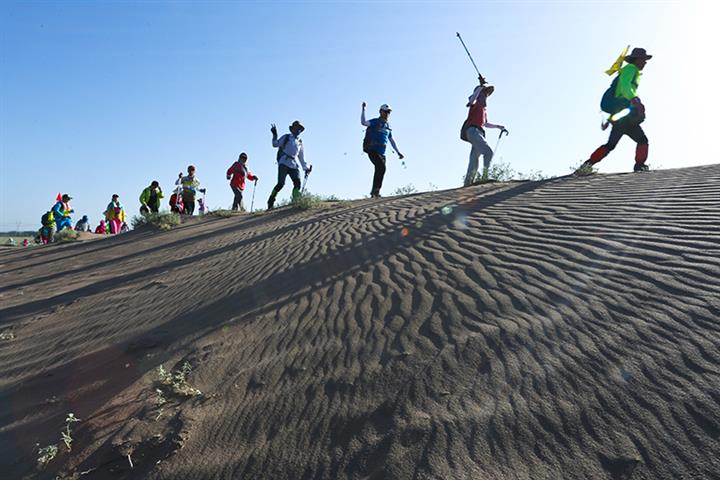 (Yicai Global) Nov. 8 -- China’s outdoor sports industry is expected to reach a market scale of CNY3 trillion (USD414 billion) by 2025, according to a plan issued by several government departments, including the General Administration of Sport of China.

10,000 outdoor sport camps will be built in the next three years, the plan noted, adding that China should offer more outdoor fitness and leisure products and enhance the application of augmented reality and virtual reality technologies to build a more immersive space for outdoor sports.

China had more than 400 million outdoor sports participants in 2021, reaching an outdoor product industrial scale of CNY183.1 billion (USD25.3 billion), up 8.2 percent from a year earlier, data from the plan showed. The number of outdoor activity sites, such as ski resorts, mountain camps, aviation flight camps, auto-camping grounds, and rock-climbing spots increased significantly in the period.

China’s outdoor sports industry is still in the early development stage, and its market potential will be further released, according to the plan. Natural areas are not easily accessible for outdoor sports, and there is also a lack of professional athletes, facilities and products, and brand awareness.

“As an emerging and popular outdoor activity, camping has more sites thanks to policy support,” said Bohai Securities. “The supply chain optimization is expected to bring new participants, which could drive customers’ spending in the industry.”

The market scale of China’s camping business can grow to CNY248.3 billion by 2025, pushing the total to CNY1.4 trillion, Bohai Securities added.

From the perspective of per capita consumption, Chinese outdoor participants spent less than CNY20 (USD2.75) a year, versus CNY300 to CNY800 (USD41 to USD110) in developed countries in Europe, America, and Asia, according to a report from China Merchants Securities.