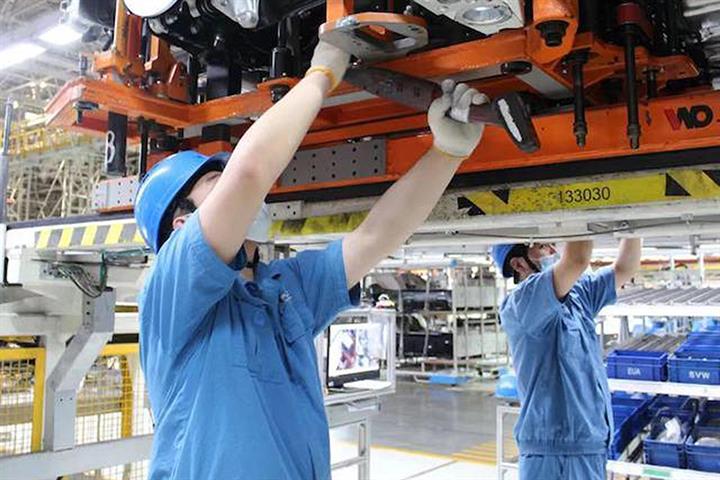 Shanghai’s Auto Industry Prepares to Get Back to Work, Logistics Bottleneck Starts to Ease

(Yicai Global) April 18 -- Shanghai’s car industry players are prepping to resume production and the breakdown in logistics is beginning to be resolved as the Covid-19 outbreak that has paralyzed the city for almost a month is on the wane and as the central and local governments call on key enterprises to reopen in a safe way.

Many auto industry suppliers suspended output or introduced so-called closed-loop management, isolating workers so as to avoid a shutdown, because of the latest wave of Covid-19 in the country. Outbreaks in Shanghai and Jilin province, major auto production centers, have led some carmakers to halt output since last month.

The Shanghai government called for key enterprises to reopen again on April 16 amid strict Covid-19 safety protocols. The Ministry of Industry and Information Technology has also sent a team to the city to promote the stable resumption of production in key fields such as chips, automobiles and biomedicine industries.

"We have started to mobilize employees to return to the factory," Wang Dong, an engineer at a new energy vehicle parts company that supplies Tesla and SAIC Motor, told Yicai Global. “One-third of them have already returned, and another batch will return once they test negative. More than a dozen delivery vans are also back on the roads,” he added.

SAIC will start a stress test for the resumption of production today, according to a person in the know. Exactly when manufacturing resumes depends on conditions at the factories and the state of the outbreak, the person said. Units SAIC Volkswagen, SAIC General Motors and SAIC Passenger Vehicle have all been shut down since last month.

SAIC has three plants in Anting, Shanghai that have been able to keep operating with workers and managers staying on the premises. But insiders told Yicai Global that even if factories resort to closed-loop management, they can only manage low levels of production because of stoppages due to a lack of manpower and poor supply of raw materials.

The outbreak has greatly hampered logistics, preventing the efficient linking of different parts of the industrial chain and restricting production. Shanghai’s whole vehicle freight flow index tumbled nearly 20 percent over the period March 1 to April 9 from the same period last year, and the national whole vehicle freight flow index slumped 6.51 percent, according to a report by Western Securities.

The country’s cabinet ordered local governments last week to issue pass cards for key supply vehicles to ease the bottleneck and for regional coordination mechanisms to be improved to allow the smooth flow of transport across key regions such as Beijing-Tianjin-Hebei and the Yangtze River Delta, which encompasses Shanghai and parts of Jiangsu, Zhejiang and Anhui provinces.

On the same day, the ‘automobile industrial and supply chain coordination platform’ was launched to learn the problems being faced by carmakers and those in the supply chain so as to better allocate resources to solve the problems.

"Our logistics service now has a pass and we are able to make deliveries every day," said Xiao Feng, an employee at a car parts factory.