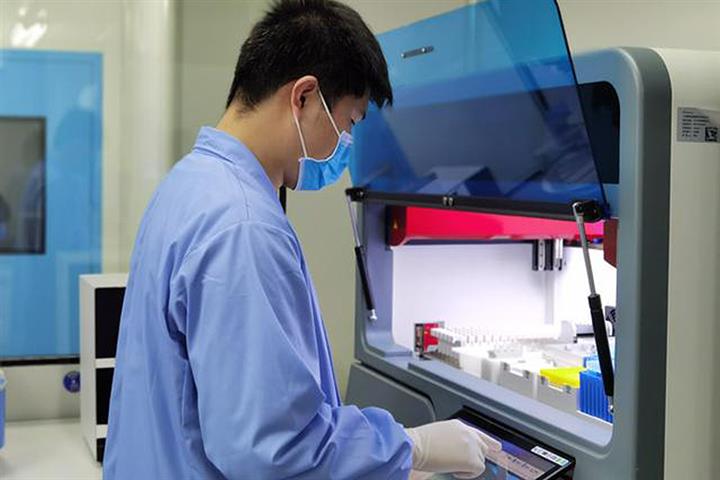 Shanghai Factories Beat the Odds to Hike Production Amid Lockdown

(Yicai Global) April 27 -- Shanghai manufacturers are managing to raise capacity despite the numerous hurdles posed by the Covid-19 lockdown, now in its fifth week, such as difficulties in hiring more workers, shortage of raw materials and blocked transport routes.

Production at many factories is now back to between 60 percent and 70 percent of normal levels from the previous 30 percent, Yicai Global learned from a series of interviews.

Hiring more workers is not easy at the moment even though the plant is keeping output low during lockdown, said Li Guangbing, general manager at Shanghai Hongene Bioengineering, the country’s biggest maker of the active ingredient used in Covid-19 nucleic acid detection tests.

Employees are staying in meeting rooms and other parts of the factory as Hongene Bioengineering is located in an industrial park and does not have staff housing, he said. The industrial park’s management is helping to provide its staff with meals and drinks.

"We are cautious about bringing in too many people at once, which would put too much pressure on our operations before the social target of ‘Zero Covid’ is achieved.” Li said.

Some companies are handing out allowances to their employees to boost morale and some have set up a 'waiting period' of between seven and 10 days before newly returned workers are allowed back into the factory.

Problems with getting enough raw materials has also seen a surge in pricing. The cost of swabs more than tripled recently, said Yang Enhuan, vice general manager at Shanghai Tellgen Diagnostic Technology, which makes the extraction agents for nucleic acid tests. Although these agents don’t make up a large part of its business, Tellgen Diagnostic was still able to mobilize production to meet the city’s pandemic control needs, he said.

We ran out of a core raw material, acetonitrile, as our usual supplier’s equipment broke down, Li said. Fortunately, with the help of the government, we were able to source some from Sierbang Chemical in Lianyungang, eastern Jiangsu province. They normally only supply longstanding and overseas clients.

Logistics are another headache. Local authorities have recently issued a traffic pass that will allow delivery vans free range of the city. But if the goods are being brought in from outside of Shanghai, it is still difficult to find drivers willing to make the journey even with surging freight costs.

And overseas suppliers are not willing to send goods to China as they worry about them being lost or damaged on the way, especially medical products which require a special storage temperature during the long journey to avoid possible loss of efficacy.