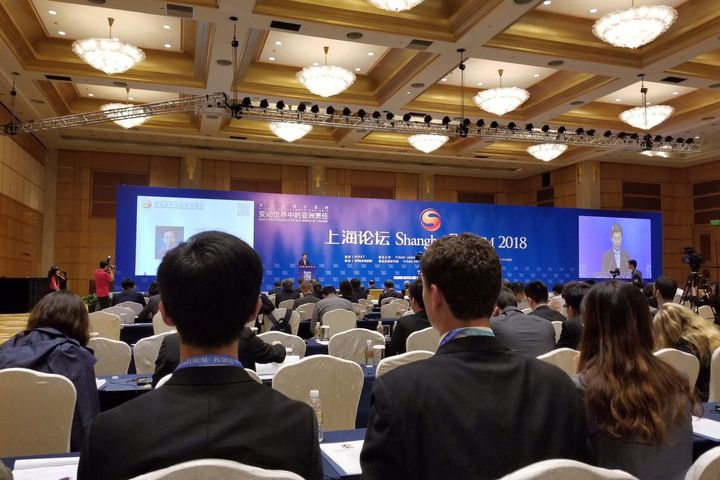 (Yicai Global) May 26 -- The Shanghai Forum 2018 conference opened Saturday with the theme of "Asian Responsibility in a World of Change".

The annual symposium, which debuted in 2005, is hosted by Fudan University and the Korea Foundation for Advanced Studies, with the aim of bridging global luminaries in the political, business and academic fields to offer suggestions for regional development and national plans.

Xu Tao, director of department of international cooperation and exchanges of the Ministry of Education, attended the opening ceremony and stressed the importance of intercultural and people-to-people exchanges in his welcome remarks.

A number of high-profile figures delivered keynote speeches at the forum, including Shamshad Akhtar, under-secretary-general of the United Nations and executive secretary of UNESCAP; Takeo Kawamura, chairman of the Standing Committee on Budget Member for the House of Representatives of Japan; Luiz Carlos Bresser-Pereira, former finance minister of Brazil; Graham Tillett Allison Jr, founding dean of the John F Kennedy School of Government at Harvard University; and Wang Xinkui, president of the Shanghai WTO Affairs Consultation Center and former chairman of the Shanghai Committee of the Chinese People's Political Consultative Conference.

The three-day forum, which runs through Monday, has six panels -- Global Governance, Environmental Governance, Public Security, Social Governance, Scientific and Technological Innovation, and Culture and Civilization -- and is composed of 13 roundtable conferences and 14 subforums.

The conference touches upon issues of common concern in Asia and the world, such as major country relationships, the Belt and Road Initiative, artificial intelligence, green governance, green financial innovation, measures in response to aging, and polar governance and exploration.