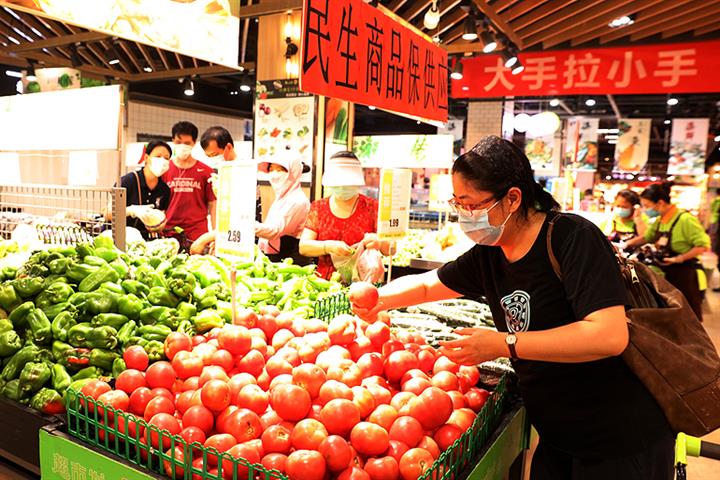 (Yicai Global) July 10 -- Shanghai spent the most of any first-tier Chinese city on retail purchases in the first five months of the year, followed by Beijing, whose consumption fell the most among the four major first-tier cities, the 21st Century Business Herald reported today. The rankings of the remaining eight cities all changed.

Shanghai’s retail sales fell 13.8 percent to CNY549.9 billion (USD78.5 billion) in the January to May period from a year earlier, the report said, adding that it was the only municipality with total retail sales in excess of CNY500 billion.

Beijing’s thirst for shopping slipped 18.2 percent to CNY473.8 billion. The city had another Covid-19 outbreak last month, which may have further dented its first-half consumption.

Chongqing rose to third from fourth a year ago, with CNY426.9 billion of retail sales, down 10.5 percent. Guangzhou fell to fourth from third with CNY342.3 billion, an 11.9 percent decline.

Shenzhen ranked seventh in the same period last year, which does not match its position as third-highest for gross domestic product. It came sixth in the five months to this May with retail sales of about CNY289 billion, down 16.5 percent.

Shenzhen’s relatively low consumption rate is often attributed to the fact that it neighbors Hong Kong, which has led to an outflow of funds to the special administrative region. But contact between the pair was almost entirely severed in recent months due to the coronavirus epidemic.

Consumption by Shenzhen residents has not shown any obvious signs of rebounding compared with other cities, the report added.

Shenzhen's registered population was just 4.95 million last year, much lower than that of Beijing, Shanghai and Guangzhou, the report said. Its population is relatively young, and many people there are still at the stage of accumulating wealth. High housing costs and low home ownership also crowd out discretionary spending.

Wuhan, which ranked sixth a year ago, suffered the steepest decline in consumption due to its coronavirus lockdown. Retail sales in the capital of Hubei province slumped 37.9 percent to CNY186.5 billion, ranking it 10th.