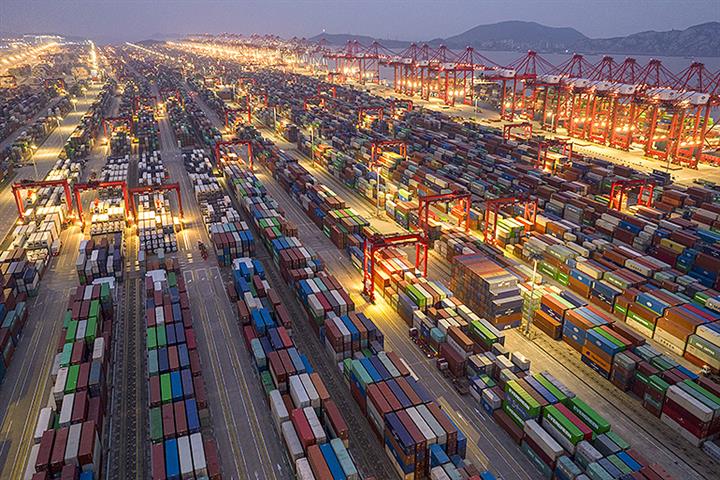 (Yicai Global) May 10 -- China’s biggest port in Shanghai handled 1.8 percent more containers in the January to April period from a year earlier despite a plunge in throughput last month because of the Covid-19 outbreak in the city.

Container throughput at Shanghai port was 15.3 million twenty-foot equivalent units in the four months ended April 30, according to data shared by a unit of state-owned Shanghai International Port Group at a press briefing yesterday.

The port handled about 12.3 million TEUs in the first quarter, up 8.1 percent from a year ago, Yang Xiaobin, general manager at Shanghai Tongsheng Logistics Park Investment and Development, told reporters. Last month the figure was nearly 3.1 million TEUs, averaging over 100,000 a day, he said.

Yang did not disclose April’s annual percentage change, but Yicai Global calculated it at minus 17.4 percent after comparing the data for the same two months in 2022 and 2021.

Shanghai began a citywide lockdown at the start of April.

The daily rate was about 113,000 TEUs on April 30, or about 80 percent of the level seen before the city’s recent Covid-19 outbreak, thanks to government policies promoting the resumption of work, he said.

With more firms gradually getting back to business since late April, container handling is expected to increase further this month, said Lin Yisong, deputy director of the Special Comprehensive Bonded Zone Division of the Management Committee of Lingang New Area in Shanghai’s free trade zone.

Shanghai port was the world’s largest for a 12th straight year in 2021, with throughput of more than 47 million TEUs.