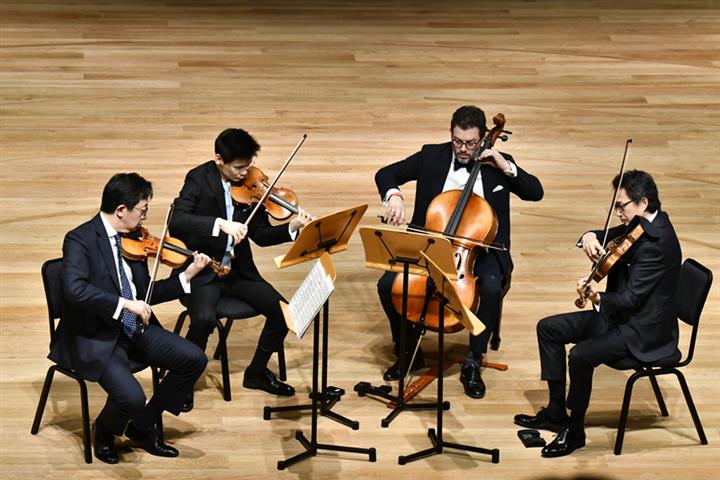 (Yicai Global) Dec. 15 -- The Shanghai Quartet, an internationally known string quartet formed almost four decades ago, has decided to move back to China after being based in the United States for the past 30 years, as chamber music has begun to seize the popular imagination in the country.

The four musicians and their families moved to the northern Chinese city of Tianjin, where they will be permanent professors at the Tianjin Juilliard School. The quartet will mostly perform and teach in China and will tour overseas after the pandemic is over.

The quartet -- co-founders Li Weigang and Li Honggang, who play first violin and the viola, respectively, American cellist Nicholas Tzavaras, and second violin Yu Xiang, who joined last summer -- opened this new chapter in the group’s history by playing two concerts in China, one at the Tianjin Julliard School on Dec. 8 to 630,000 listeners and the other at Shanghai Symphony Hall on Dec. 22.

“We’ve been looking for a platform in China to pass on our more than 30 years experience in chamber music to the next generation,” Li Weigang told Yicai Global.

The main reason the quartet has relocated to China is the rapid development of chamber music in the country, he said, noting that the Covid-19 pandemic is also another factor that influenced the decision.

Now is the best time to return, Li added. It is only a matter of time before chamber music explodes in China based on the popularity of the country’s classical music market and on the number of venues and fans, he said.

“Chamber music is thriving,” Yu said. “Its development here is much faster than in any other country.” Yu gave up all his work in the US to move to China with his wife.

Tzavaras told Yicai Global how hard it was for him to persuade his spouse to move to Tianjin with their three children, especially because of the language barrier and cultural differences they would face. “It’s risky for me, but we will never succeed unless we do so,” he said.

The Lis, who grew up in China, founded the Shanghai Quartet in 1983 and moved to the United States two years later. Over the decades, the quartet has staged nearly 3,000 concerts worldwide and made 35 records.

“In 1985, chamber music in China was completely different from now,” Li Weigang told Yicai Global. There was no chamber music atmosphere in the 1980s, it was just an optional course even at the Shanghai Conservatory of Music, he said.

The musicians often returned to China for performances and teaching, at least six or seven times a year, even in second and third-tier cities. Tzavaras, who visited China for the first time in 2001, performed in Beijing several times and gave lessons at the Shanghai Conservatory of Music and the Central Conservatory.

They have sensed the audience’s enthusiasm for chamber music in the last few years. They played all of Beethoven’s 16 string quartets in an eight-month tour of Beijing, Tianjin, Wuhan, Changsha, and Shanghai for the quartet’s 35th anniversary in 2018. “Such concerts are never too many,” a music fan said, remembering when he went to six concerts at one go.

China has more than 70 symphony orchestras with a growing number of children learning how to play  musical instruments and with the market maturing. “China should have at least 20 professional string quartets,” Li said, noting that forming one is easy as just four musicians are needed.

The Shanghai Quartet’s international tour and teaching schedules have been affected by the pandemic, so the group was forced to make a choice. Considering the situation in the US, troublesome international round-trip flights, and quarantine, they finally decided to move to China.

For the first time, the group has signed an agreement with a Chinese agency and plans to go on tour in the country as early as next June.