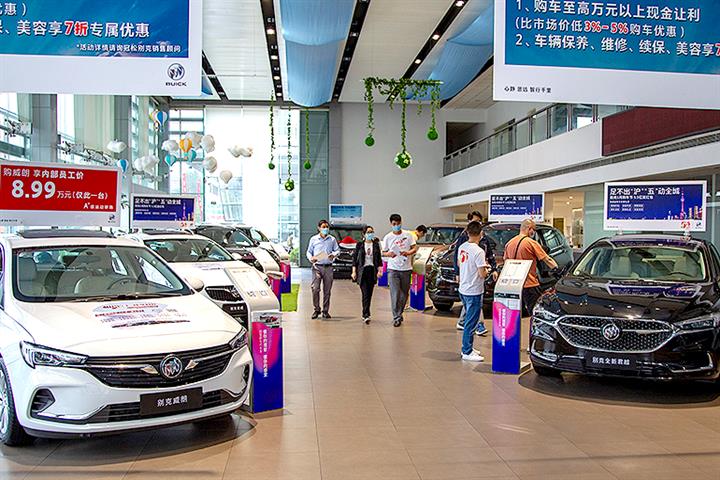 (Yicai Global) May 13 -- Shanghai’s May 5 Shopping Festival, introduced this year to help reignite consumption in the aftermath of Covid-19, prompted a substantial leap in online purchases, a return to normal spending levels in brick-and-mortar outlets and drove auto sales into the double digits, according to a municipal government official.

This month’s sales promotion has been very successful, Hua Yuan, director of the Shanghai Municipal Commission of Commerce, said at a press conference today.

Consumers spent CNY15.7 billion (USD2.2 billion) in the first 24 hours of the retail campaign. Ten million packages were picked up for delivery on May 6, up 31.7 percent from the same day last year.

The May 5 Shopping Festival runs through the entirety of this month and next and straddles key national holidays such as Labor Day, Children’s Day and the Dragon Boat Festival.

Over 520,000 online merchants and more than 100,000 brick-and-mortar shops are participating in the festival, Hua said. They have issued over CNY24 billion in discount coupons, which has helped to unlock people’s purses, he added.

Online retail sales exceeded CNY40 billion (USD5.6 billion) in the first 10 days of this month. Express couriers delivered 77.4 million packages in Shanghai between May 1 and May 10, up 26.3 percent from a year earlier.

Offline shopping in physical stores also benefited. CNY48.2 billion was spent in the first 10 days of May, around the same level as last year, Hua said.

Even the hard-hit auto sector saw a ray of hope with a 16.8 percent jump in sales from the same period last year.

"The shopping bonanza has come at the right time to help the automobile industry,” Cai Bin, assistant president of SAIC Motor Group, said at the press conference. The Shanghai-based carmaker has seen a 58 percent year-on-year increase in potential customers to 85,000 so far this month, and a 23 percent jump in orders to almost 10,000, he added.

Sales at 12 major carmakers jumped 16.8 percent from a year earlier, Hua said. Those at China Yongda Automobiles Services Holdings have more than doubled from last month.