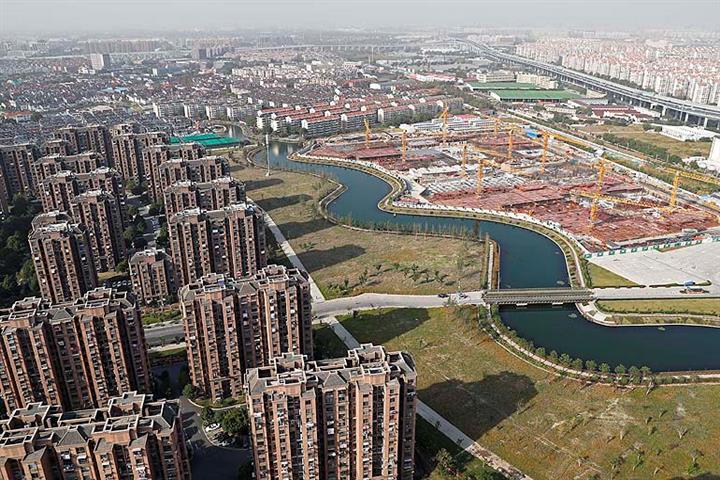 (Yicai Global) March 4 -- Shanghai laid out the blueprint yesterday for a whole new level of opening up to the West in the form of the Hongqiao International Open Hub, a global central business district, international trade center and major transportation hub spread over 7,000 square kilometers.

The Hongqiao International Open Hub will play a unique role in the country’s opening-up patterns, Executive Vice Mayor Chen Yin, who also is a member of the Standing Committee of the municipal Communist Party Committee, said at a press conference yesterday.

Earmarked to be completed in 2035, the Hongqiao Hub will become the crossroad for global flows of freight, business, people and capital, according to the blueprint, which has been approved by China’s cabinet. It will take the country’s areas of limited foreign exchange, namely the special economic zones, free trade zones, state-level new areas and coastal open cities, to a whole new level.

Stretching from Hongqiao district in the west of Shanghai to neighboring cities in Jiangsu, Zhejiang and Anhui provinces, the Hongqiao Hub will become another significant vehicle, after projects such as the FTZ’s Lingang New Area, for Shanghai to advance the integrated development of the Yangtze River Delta, one the country’s most economically developed areas.

The area covered by the hub encompasses 15 million people and last year its economic aggregate reached CNY2.3 trillion (USD355.4 billion), accounting for just under 10 percent of the Yangtze River Delta’s gross domestic product. All parts of the hub will contribute to its construction, not just Shanghai, the State Council said.

“The Yangtze River Delta is prominently export-oriented and has mainly focused on global circulation in the past,” said Liu Zhibiao, head of Nanjing University’s Jiangsu Yangtze River Industrial Economic Research Institute. “The new hub will facilitate the opening up to overseas regions by first opening up at home in order to achieve the exchange of goods and services between China and abroad.”

The Hongqiao Hub will focus on the three core functions of Big Transportation, Big Business and Big Conventions and Exhibitions, the blueprint said.

The Hongqiao Central Business District, which covers an area of 151 square kilometers, is already a thriving commercial and business center as well as a major transportation hub, with direct links to the city’s subway system, inter-city road network and high-speed rail lines. It is also home to one of the city’s two international airports, Hongqiao International Airport.

Since it was set up in 2009, Hongqiao CBD has grown into a distribution center for both imports and exports with the whole of China. It has growing influence in the international arena since it hosted three China International Import Expos from 2018 at its National Exhibition and Convention Center, the world’s largest exhibition hall.

The majority of the policies aim to strengthen the spillover effects of the CIIE by turning exhibits into commodities, exhibitors into investors as well as buyers into traders, said Shen Weihua, deputy director of the Shanghai Municipal Commission of Commerce.

For instance, they could make CIIE preferential policies on customs clearance, funds settlement and investment the norm and promote them to the whole of Shanghai, Shen said.

The Hongqiao CBD should continue to foster unicorns and sector-leading companies in cross-border e-commerce, digital trade, supply chain management and other fields, in order to encourage the gathering of suppliers that integrate both domestic and overseas trade, the plan said.

Shanghai should also improve the connection between its two international airports, Hongqiao and Pudong, which are located on opposite ends of the city, and strive to reduce the train journey times between the Hongqiao CBD and major cities in the Yangtze River Delta to under two hours, it added.