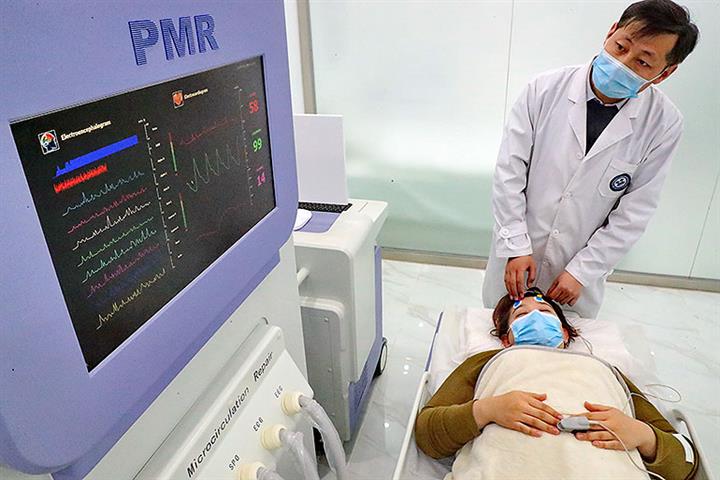 Sleep-Deprived China’s Slumber Aid Market Could Be Worth USD153.6 Billion by 2030, Report Says

(Yicai Global) March 22 -- Over 300 million Chinese now have trouble sleeping, leading to a boom in sleep aid businesses that could be worth as much as CNY1 trillion (USD153.6 billion) by 2030, according to a recent report.

The average person in China only sleeps six hours 41 minutes and 24 seconds each day, two hours less than in 2013, according to a report by the Chinese Sleep Research Society released on March 19.

Those who work in the round-the-clock food delivery, parcel courier, healthcare, e-retail and social media sectors only sleep between three and six hours a night, the society found. Going to bed after midnight is now a common phenomenon.

Less than a quarter of Chinese people entered deep sleep last year, the society said, reporting findings on the sleep stage with the slowest brain waves for the first time. The average duration of deep sleep was one hour and 47 minutes, and the vast majority of those surveyed felt that they slept very lightly.

As a result, sleep aid firms are on the rise. They offer a range of products from ambiance modification, such as soothing sounds and lighting, sound reduction apparatus such as headphones and ear plugs and therapeutic treatment such as over-the-counter pills and sleep apnea devices. The industry is expected to be worth CNY400 billion (USD61.4 billion) this year and CNY1 trillion by 2030.

Last year 470 firms entered the sleep economy, a year-on-year leap of 23 percent, most of which have a registered capital of under CNY2 million (USD307,238). Sixty-two percent of the 2,400 companies that use the key words ‘sleep aid,’ ‘insomnia’ and ‘sleep’ in their business description on company data platform Tianyancha were formed in the last five years. Sixty-four percent of these are engaged in sales and 15 percent in research.

Most slumber aid firms, some 700, are located in China’s southern Guangdong province. Beijing has the second largest number, around 500, followed by northeastern Shandong province and southeastern Jiangsu province with just over 100 each.