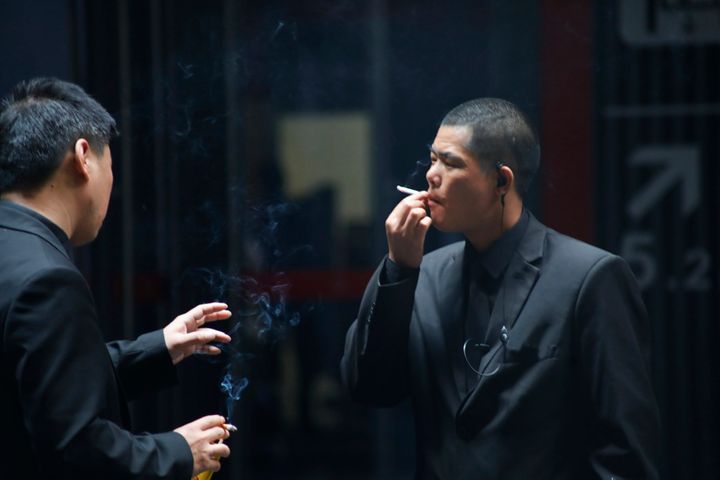 (Yicai Global) May 30 -- The number of those lighting up in China has dropped for the first time ever, a recent survey by Chinese health authorities shows.

The historic decrease occurred last year, the latest report on national tobacco control by the Chinese Center for Disease Control and Prevention indicates.

Anti-smoking activists hailed the development but called for further increases in tobacco taxes to curb consumption as the figure still greatly lags behind the government's 2030 control target.

Tobacco accounts for one million deaths every year in China, according to US-based Duke University's Global Health Institute. The country is the world's largest grower and consumer of the noxious weed, producing 30 percent of the planet's total cigarettes and consuming one-third of its tobacco. China rolled out 2.34 trillion cigarettes last year.

"We are very glad to see the smoking rate has decreased somewhat, falling to 26.6 percent in 2018 from the 27.7 percent in 2015. The first reduction in total smokers is also quite encouraging," said Jiani Sun, a technical official with the Tobacco Free Initiative at the World Health Organization. "However, the figure still falls far short of the government's target, which is that the smoking rate should decrease to 20 percent by 2030."

The Chinese government raised taxes from May 10, 2015 to curb use, with the value-added tax rate for wholesale cigarettes climbing to 11 percent from 5 percent. It also levied an added duty of CNY0.005 on each 'coffin nail.'

Consumption has become ever cheaper for smokers from subsequently enhanced purchasing power, though the government raised the sin tax in 2015, China CDC, which is an arm of the country's health ministry, noted in the survey.

Governments should consider regular and sustained increases in these taxes to promote control of the consumption of the addictive plant and public health, Zheng said. Among respondents to the CCDC survey, 41.8 percent supported higher cigarette prices and taxes.