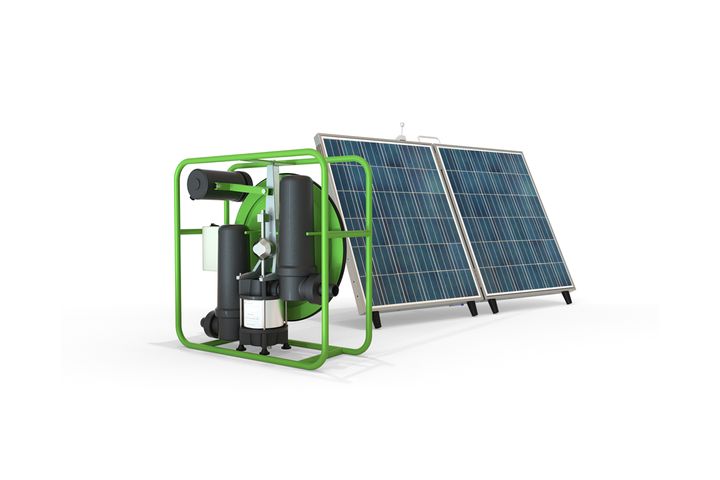 (Yicai Global) Dec. 4 -- Across Africa, smallholder farmers pray for the rains that dictate their fragile economic fortunes. If the clouds open as expected, farmers can provide for families, grow a surplus and earn extra income at market. If the rains fail, animals go unfed, school fees become unaffordable, and food may need to be rationed in the months ahead.

Despite sustaining the livelihoods of millions of Africans, the continent's agricultural sector remains dependent on erratic seasonal rains. According to the International Water Management Institute, irrigation covers just seven percent of sub-Saharan Africa's total cultivated area of 183 million hectares –the lowest proportion of irrigation anywhere in the world.

With the continent on the frontline of climate change, rain is expected to become ever more sporadic. According to the Intergovernmental Panel on Climate Change (IPCC), this will further impact production of African wheat, rice and maize. There is an urgent need for climate neutral solutions to help farmers draw every last drop of water from their land.

One company is stepping up to the plate. FuturePump, founded in 2011 and spread between the UK, Netherlands, Kenya, and India, sells solar powered irrigation pumps to smallholder farmers –those with little more than an acre of production. The pump, developed with the Dutch nonprofit Practica Foundation with the support of nonprofit iDE and manufactured in India, helps farmers avoid hours of labour and saves money that would have been used to buy expensive, dirty fuel for traditional pumps. Perhaps most significantly, the technology frees farmers from a dependence on seasonal rains by granting the opportunity to grow produce out of season.

"About half of our customers used to attempt manual irrigation, so for those guys the stories are all about the hours saved hauling buckets of water or pedal-pumping water, and the ability to grow crops more reliably and consistently," says FuturePump managing director and founder Toby Hammond.

"The other half used to use petrol and diesel pumps, so they are saving money and emissions by not using fossil fuels. From the point of view of the farmer this is about increasing their incomes – these are low income communities and the ability to grow crops years round, particularly in the dry season or when rains don't come, is a very attractive thing."

FuturePump says that some farmers have been able to double or triple their income by eliminating fuel costs and cultivating crops out of season, and they generally recover their investment in less than two years. And yet despite the technology being relatively cheap – solar pumps sell for around USD650 each –many of the firm's would-be customers simply do not have that kind of money upfront.

"One of the fundamental problems is that farmers anywhere in the world tend to have money at harvest time and not in between. And the vast majority of our markets need a payment plan, some form of consumer financing," explains Hammond, noting that financing is the biggest challenge to scaling the product's distribution."It may well pay for itself through fuel savings and increased productivity in 18 months, but that doesn't mean the farmer has that money in his back pocket." His company has put payment plans for small-scale farmers in place with some success.

The firm expects to sell some 4,000 pumps this year, and hopes to continue doubling sales every year in line with its performance over the last three to four years. Yet Hammond is under no illusion that sustainable technologies offer an immediate route to riches.

"The very ethos of the company is around environmental and social impact. We are hoping to be able to stand on our two feet economically and make a bit of money, but it's not the most lucrative business to be in. We are selling novel technology to very, very low income people in very difficult markets," he says.

Indeed, in the early days the company was largely reliant on grants from the UK's Department for International Development and USAID in order to expand its footprint. But Hammond believes that FuturePump is now on the cusp of sustainable growth.

"We're much less reliant on that support these days and I think by the end of next year we won't be at all, but it wouldn't have been possible to get things off the ground, particularly in the early days, without this funding support," he says. "Donors are recognising that it's a useful thing to invest in because if we make the numbers work we can make an impact without coming back for further money."

As the impact of climate change continues to bite, climate neutral solutions like solar pumps are likely to prove increasingly attractive to investors and customers. Provided appropriate financing can be arranged, the solar pump could help to deliver farmers around the world from the curse of water scarcity.