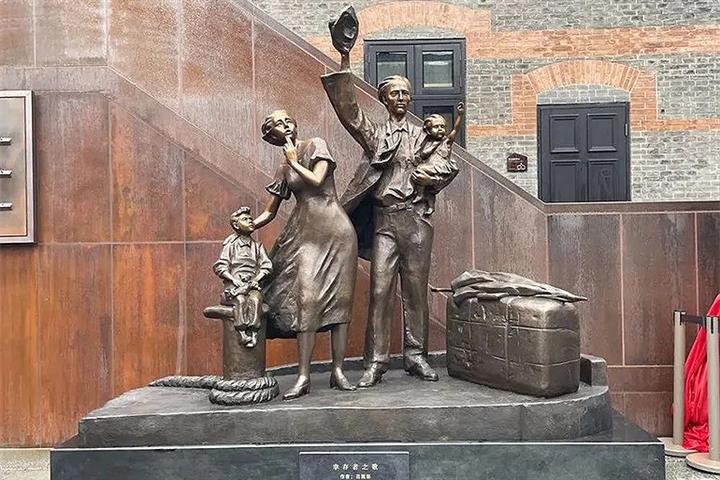 (Yicai Global) Jan. 28 -- A statue commemorating Jewish refugees in Shanghai during the Second World War was unveiled at the Shanghai Jewish Refugees Museum yesterday, which was International Holocaust Remembrance Day.

The statue was inspired by the novel ‘Song of Survivors’ written by Bei La and published in 2019 and bears the same name.

The four-figure statue depicts the family of Michael and Dora Medavoy standing on the deck of a ship reluctantly bidding farewell to Shanghai as they set sail for Chile in 1947. They had fled Nazi persecution in the late 1930s and found refuge in Shanghai where they achieved their dreams through hard work despite challenges.

Designed by sculptor Lü Qizhang, the bronze statue was unveiled just days after the 30th anniversary of the establishment of diplomatic relations between China and Israel, which fell on Jan. 24.

Bei’s novel was based on the real love story of Micheal David Medavoy and Dora Medavoy, parents of famous Hollywood producer Mike Medavoy, who was born in Shanghai in 1941.

“I’m so proud to have lived in Shanghai,” Medavoy, who won eight Best Pictures Oscars, said in an interview. “Chinese people are very friendly and this is an amazing city,” he noted, adding that the “the sculpture commemorated my life, and not only the Hollywood part but all of it, from the very beginning.”

Lü told Yicai Global that “the difference between this and other statues is that I didn’t want to express the suffering of war and the vicissitudes of human destiny, but rather the reality of people’s real lives and their desire for a better future.”

The Shanghai Jewish Refugees Museum and the Consulate General of Israel in Shanghai also teamed up to project the words “We Remember” on the museum’s wall through last night into this morning.