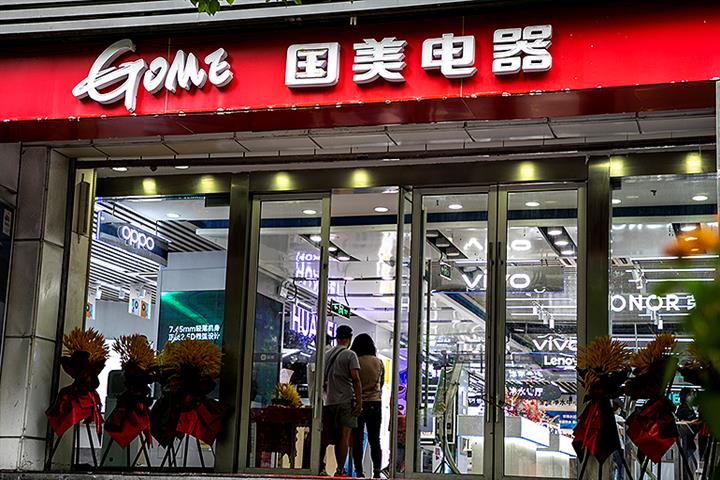 (Yicai Global) Sept. 27 -- Gome Holdings Group did not pay employees this month and said it may let go more staff as the cash-strapped electronics retail giant strives to reverse losses by refocusing on its core offline business.

In the face of unprecedented difficulties, Gome temporarily adjusted salary payments this month to ensure normal operations, the Beijing-based firm told Yicai Global yesterday, adding that high operating costs due to its strategy to refocus on its main business may lead to more layoffs. Gome will pay full salaries and severance pay once the business situation improves, it said.

A number of employees said the struggling retailer had not paid last month’s salaries by Aug. 25, the latest date for payment in August according to their contracts, financial media outlet Caixin reported earlier.

During the time that founder Huang Guanyu was in jail for insider trading and graft, Gome stumbled amid stiff online competition from the likes of Alibaba Group Holding and JD.Com and has lost money for five consecutive years. Its loss widened 50 percent to CNY2.96 billion (USD414 million) in the six months ended June 30 from a year earlier, while revenue sank 53 percent to CNY12.1 billion (USD1.69 billion).

As one of the largest bricks-and-mortar retailers in China, Gome’s business was hit hard by coronavirus outbreaks that shuttered stores and upended deliveries of online orders, the firm said in its first-half earnings report. Last month, Huang said he would restore Gome’s profitability through asset restructuring and strive to post the firm’s best financial performance by 2025.

But Huang has cut his stake in the retailer he founded in 1987 several times this year, reducing it to 43 percent from 61 percent at the end of last year, according to information disclosed by the Hong Kong Stock Exchange.

Huang was granted early release from jail in February last year after serving part of a 14-year sentence.