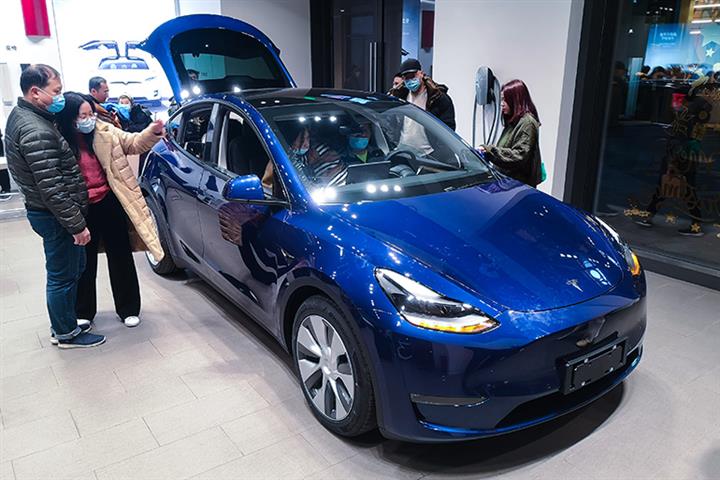 Tesla Prices Its China-Made Model Y Cars at 30% Less Than Imported Ones; Orders Pour in

(Yicai Global) Jan. 4 -- Tesla’s China website was inundated with orders on New Year’s Day, even paralyzing it at one stage, as the US electric car giant’s much-anticipated China-made Model Y cars came on sale at a starting price 30 percent less than imported versions.

The Model Y long-range and high-performance models are available from CNY339,900 (USD52,590) and CNY369,900 respectively, the California-based firm said on the first day of the year. The autos will start to be delivered from the end of February.

Such was the enthusiastic response among Chinese consumers that the website was temporarily inaccessible, Tesla’s customer support said on its micro-blogging Weibo account on Jan. 1.

So far, Tesla’s gigafactory in Shanghai, which opened a year ago, has only been rolling out Model 3 vehicles. The Model Y, which is a bigger, more luxurious version of the Model 3, is expected to be much more popular, Chief Executive Officer Elon Musk said previously.

Sports utility vehicles are very popular in China and the Model Y should have better sales than the Model 3 sedan, said Cui Dongshu, secretary-general of the China Passenger Car Association.

2020 was a very good year for Tesla. Its stock price [NASDAQ:TSLA] gained more than eight-fold, boosted by its inclusion in Standard & Poor’s 500 Index in December. The electric car maker closed the year 1.57 percent higher on the last day of trading on Dec. 31 at USD705.67 with a market valuation of USD668.9 billion. It has achieved profit for five consecutive quarters.

The firm delivered 499,600 electric vehicles last year, a 36 percent gain year on year, beating Wall Street estimations of an output of 481,300 units, Tesla said on Jan. 2. It came just shy of its annual delivery target of half a million vehicles but allowing for a 0.5 percent fluctuation in final delivery figures, it might actually have achieved its full year goal, it added.