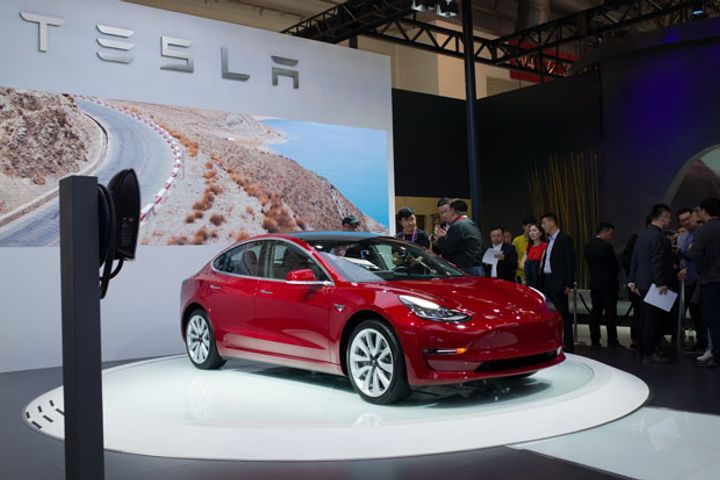 (Yicai Global) Nov. 05 – Tesla plans to raise the production capacity of its Model 3 cars to 10,000 in a week with 7,000 cars to be manufactured at its US plant in Fremont and 3,000 in Shanghai, the electric carmaker said in a statement.

Tesla's efforts to localize through procurement and manufacturing at its super factory in Shanghai may be a slow process as it faces many uncertainties, including regulatory approval, supply chain restriction and the pace of construction of the factory, the carmaker said in a statement to the US Securities and Exchange Commission on November 2.

Tesla bought a land for its Shanghai factory for CNY973 million (USD143.8 million) on October 17.

The American automotive company was ahead of schedule for the Model 3 vehicle production in China. Tesla will need about two years to complete construction and start production at its Shanghai factory, and another two to three years to achieve the set target, the company said in July.

Tesla plans to start part of the Model 3 production in China in 2019, which will sold to Chinese customers only, the company said in a letter to its shareholders.

China is the largest market for electric vehicles as well as the largest overseas market for Tesla. Tesla's sales in China last year doubled from a year earlier to USD2 billion. Sales of new energy vehicles in China in September increased 54.8 percent compared with the same period last year, and the sales in the first three quarters increased 81.1 percent from a year earlier to 721,000 vehicles, according to data released by the China Association of Automobile Manufacturers.

The production capacity is not just about money but also involves equipment, supplier matching and other professional complications, according to Zhong Shi, an auto analyst. When a small-scale production is expanded suddenly, it gives rise to many engineering problems, Zhong said.

"Tesla's production capacity problems have remained unsolved for years in the US. So it can't be done in China overnight," he added.