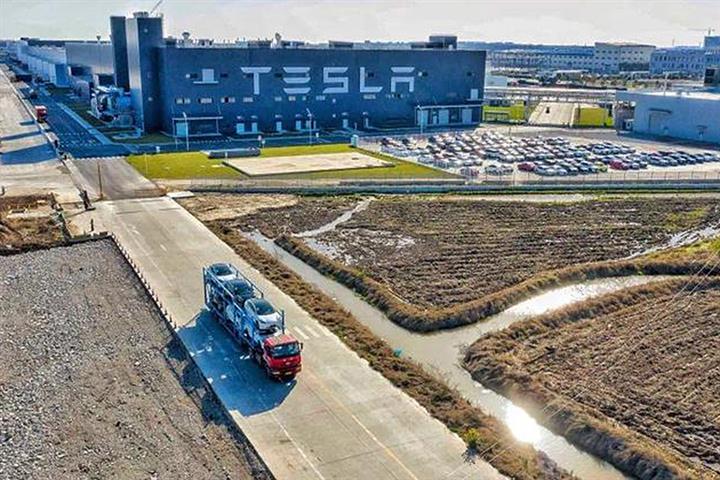 (Yicai Global) May 10 -- Aptiv has halted operations at its factory in Shanghai after a case of Covid-19 was found among its workforce over the weekend. The suspension could have a knock-on effect on US electric car startup Tesla, to which the UK auto parts maker is a supplier, which has vowed to return to pre-pandemic levels of output this month after a three-week stoppage due to an outbreak of Covid-19 in the city.

A Covid-19 case was detected in the wire harness plant in the city’s Jiading district on May 8, the Dublin-based firm told Yicai Global today. The patient and his close contacts are now in quarantine. All other staff at the factory have tested negative in two rounds of testing and no traces of the virus have been found in the factory. The plant is now waiting for instructions from authorities.

Aptiv has denied that its supply of wire harnesses, or the parts that bundle cables together, to Tesla has been disrupted.

However foreign media is now reporting that Tesla is cutting production at its Shanghai Gigafactory due to problems securing parts. “The plant plans to manufacture less than 200 vehicles on Tuesday [today], far less than the roughly 1,200 units it has been building each day since shortly after it reopened on April 19,” Reuters reported today, citing an internal memo.

"The automobile sector has a very long industrial chain, and this means suppliers need to get back to work in order for Tesla to ensure stable and sustained vehicle production," Tao Lin, Tesla's global vice president, told Yicai Global on May 7.

Chief Executive Officer Elon Musk had previously insisted that output in the second quarter would equal that of the first quarter as manufacturing would reach record levels. The Gigafactory had churned out 10,000 finished vehicles as of April 30 since production resumed on April 19, Wu Qiang, deputy governor of Pudong New Area, said on May 7.

Aptiv said last week that capacity at its Shanghai plants, including those for connectors and cable harnesses, was back to between 50 percent and 60 percent of normal levels. A lack of workers prevented it from returning to full capacity.