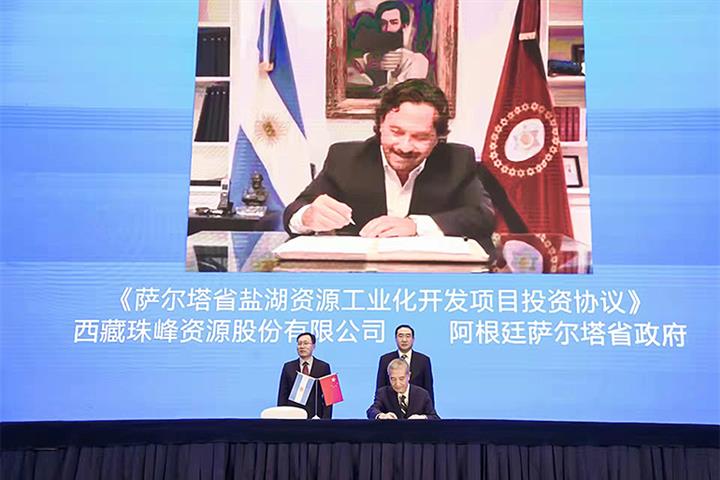 (Yicai Global) Nov. 18 -- Shares in Tibet Summit Resources soared by the exchange-imposed daily limit today after the Chinese mining firm said it will spend USD1.7 billion on two lithium projects in Argentina to boost its production of this key raw material used in the batteries of electric cars by as much as 150,000 tons.

Tibet Summit will invest USD700 million in the Sal de los Angeles lithium project in northern Argentina, with an expected output of 50,000 tons of battery-grade lithium carbonate a year, according to the deal signed with the government of the South American country’s Salta province on Nov. 16. The lithium plant is scheduled to be up and running by the end of next year and should be able to generate profit of CNY1.4 billion (USD219 million) a year based on today’s prices, it said.

Another USD15 million will go towards exploring the salt flats Salar de Arizaro in the northwest of the country before applying for a mining permit. It will then invest at least USD1 billion to build a plant with an annual capacity of between 50,000 and 100,000 tons of lithium carbonate.

In September, Tibet Summit said it will raise the money it needs for its Argentine projects through a private placement. The Lhasa-based company will issue new shares to as many as 35 investors, it said. However, there remains the risk that the share issuance does not proceed as planned and that this will impact the project implementation.

The deal, which is not binding, will not have a significant impact on the firm’s performance this year, Tibet Summit said.