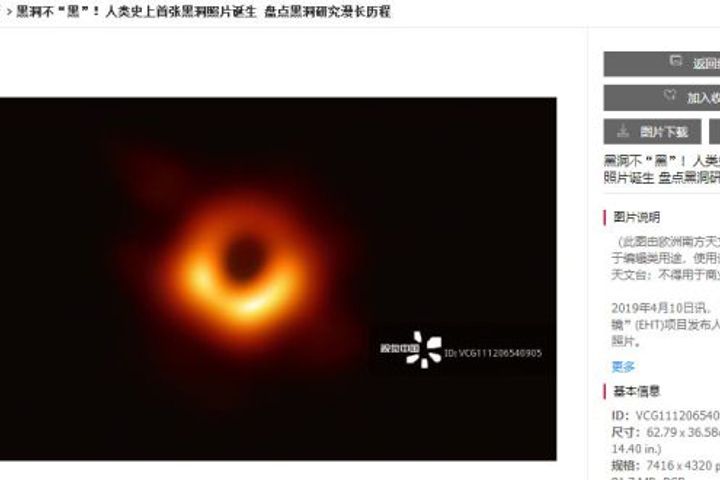 (Yicai Global) April 12 -- Debates over the ownership of and use rights to the first image ever taken of a black hole raged online in China after content supplier Visual China added its copyright watermark to the now-famous photo.

The Beijing-based company, a Shutterstock-style major supplier of commercial photos, has come under fire from users over its readiness to resort to the courts to protect its own copyrights.

Visual China's picture library shows the image came from the European Southern Observatory, which tagged it for 'Editorial Use Only, Not for Commercial Use,' users discovered after the ESO published the photo.

Some web users wishing to download and publish the photo thought they needed to pay the company, wrongly believing Visual China had bought the copyright.

The firm obtained no commercial rights to the image and was only granted the right of editorial use through its partner, it announced on social media. The non-exclusive license was also granted to other media and photo agencies, it conceded.

Visual China may not authorize commercial usage of the photo, its Vice President Cai Jijun confirmed to state media The Paper, adding those wanting to thus exploit it must contact the rights holder directly.

The picture belongs to its photographer the Event Horizon Telescope project, the ESO website shows. Use of the photo follows the Creative Commons Attribution 4.0 International License, which means anyone can use it for free if credit is given.

The EHT published the first image of a black hole worldwide on April 10. Over 200 researchers spent more than 10 years in eight observation sites on four continents to capture the elusive cosmic phenomenon.

It is 6.5 billion times as heavy as the Sun and 55 million light years from Earth in the middle of M87 Galaxy. It spews a violent jet of energy 5,000 light years into space, The New York Times reported.

A black hole is an immense and extremely dense object that nothing, not even light, can escape from if it enters its 'event horizon,' in the words of US space agency the National Aeronautics and Space Administration.

The EHT is a major international collaborative program by more than 200 researchers and multiple radio astronomy stations around the world that uses very long baseline interferometry, which, in essence, creates a planet-sized lens for ultra-high resolution.

The Tianma Radio Telescope located at the foot of Tianma Mountain in Songjiang, Shanghai, China is one of the key observatories of the project.