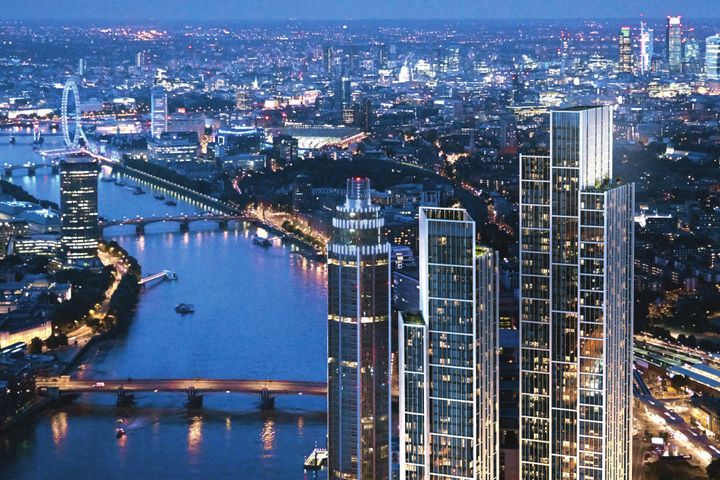 (Yicai Global) Nov. 2 -- Dalian Wanda Group Co.'s first overseas real estate project, London One, commonly known as One Nine Elms, is under construction. The project is slated to be completed by the end of next year. However, its completion may run till the end of 2019, Beijing Time reported, citing a survey by the German real estate agency, Emporis.

After changing the contractor twice, Wanda's London One project is currently carried out by Multiplex. The pitching process has been completed, but the construction for the main structure of the twin towers has yet to begin.

Emporis believes completion of the project will be delayed. The real estate agency which initiated the Emporis Skyscraper Award, known as the "Oscar in Architecture," in 2000 assesses, screens and honors the skyscrapers, at least 100-meter tall, completed every year.

Billy Hayes, a UK property sales manager from My London Home real estate agency, told Beijing Times that the project will be completed in the fourth quarter of 2019 and that the agency is helping a customer to resell an 84-square-meter City Tower, one of the tower projects in London One, apartment.

Wanda Group Chairman Wang Jianlin announced that he will invest GBP2 billion (USD2.6 billion) to GBP3 billion to carry out urban transformation project in the UK after he met with the then British Prime Minister David Cameron during the 2014 Davos Forum.

Wanda signed a plot of land in London's One Nine Elms redevelopment area in 2013 and started to develop the London One project, with a construction area of 105,000 square meters, including two tower buildings, the City Tower and the River Tower, to build a total of 439 apartments and a five-star Wanda Vista Hotel.

The real estate developers in China are getting used to rapid return of funds by pre-sales. Right after the main structure of the building completed, the bank will pay loans to the developers. But Wanda cannot get cash flow this way for the London One project.

Moreover, the Chinese firms' investments in overseas real estate markets are under close scrutiny, not good news for the One Nine Elms.

An unnamed Chinese buyer of Wanda London One apartment told Beijing Time that he does not worry about the delivery time of the property. It is the new stamp duty policy that troubles him. According to the new tax policy of the UK government, investors who purchase the second set of housing or buy-to-let house shall pay 3 percent more on the basis of the existing progressive stamp duty introduce in April 2016.