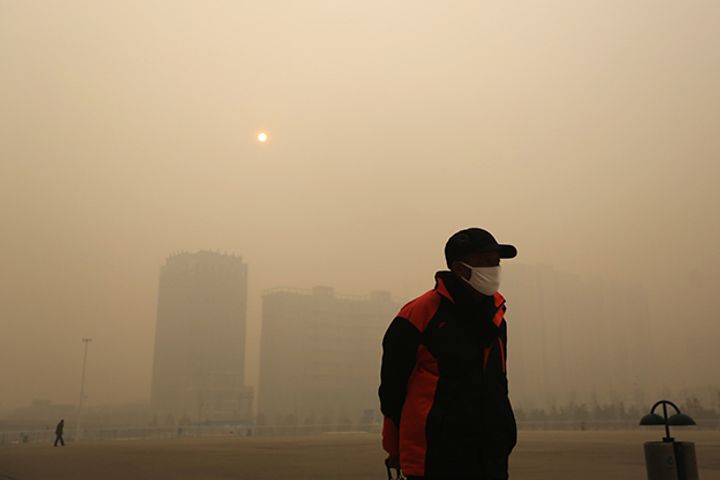 (Yicai Global) Nov. 14 -- Thick fog enveloped Beijing, Tianjin, south-central Hebei, northwestern Shandong and northern Henan this morning. Some areas in southeast Beijing and central and southern Hebei reported thick or extremely heavy fog, while in other areas visibility was down to less than 50 meters.

China's environment minister Li Ganjie made an impromptu visit to Baoding, a prefecture-level city in Hebei province, on Nov. 13 to inspect work on an emergency plan for heavy pollution weather, according to a press release posted on the ministry's website today.

Li said winter is going to be a bit early this year, with temperatures already dipping. Because heating is already on in northern regions and some rural areas are doing their own heating, regional emissions have increased. During a heavy pollution period, each locality needs to keep a tight control on emissions around the clock. Li said all law enforcement personnel should be on duty and inspect emissions whenever needed.

The ministry had sent letters to the governments of Beijing, Tianjin, Hebei, Shanxi, Shandong, Henan and Shaanxi with its forecasts of air quality.

Strong cold air will affect most parts of the country until Nov. 17 with northern China, northeast China and the northern Huanghuai region the worst hit today and tomorrow, the Central Meteorological Observatory said. It expects the fog and haze to gradually clear from north to south in northern China, the Fenhe and Weihe plain and Huanghuai region by tomorrow morning.

Follow Yicai Global on
Keywords:   Beijing,HEBEI,Smog,Ministry of Ecology And Environment