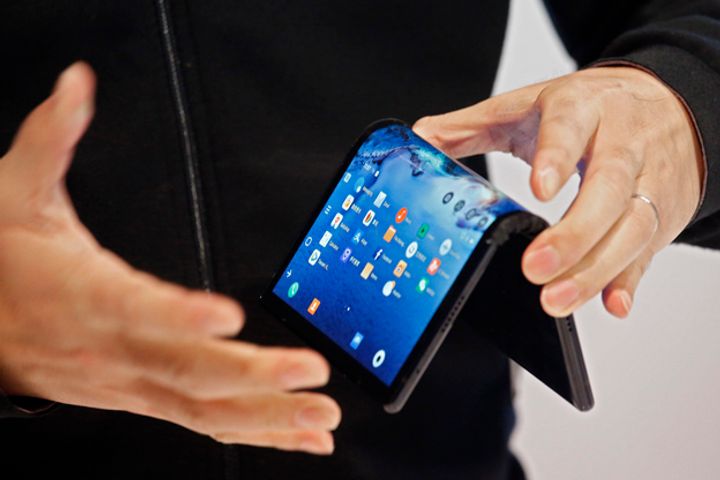 (Yicai Global) Jan. 28 -- Chinese tech giant Xiaomi and panel maker Royole are squaring up over which of the companies is most innovative in the development of foldable phones.

"More and more companies are introducing foldable concept phones," Fan said. "All of them, except Samsung Electronics and LG Electronics, buy their screens and cannot mass produce them on their own," he added in response to the video posted last week by Xiaomi President Li Bin, which introduced a working handset that folded in two places to alternate between a roughly tablet-sized and phone-sized terminal.

Xiaomi's twice-folding device is the result of independent innovation and research by Xiaomi, according to a source close to the phonemaker's folding screen supplier Visionox Technology.

Royole released its single-folding smartphone in October, and industry observer Liu Buchen believes it could be getting antsy as Xiaomi and other manufacturers begin to claim they have mastered folding screen technology. Huawei, Samsung, Vivo and Oppo have all said they will be releasing folding handsets in the near future.

The devices may not prove successful for some time yet, though, according to an analyst at screenmaking research firm WitsView Technology.

"The folding phone has a high technical threshold and needs more time to adjust for product design and quality," said Fan Boyu. "We believe that its initial market penetration rate will not be high, and expet it to make up just 0.1 percent of the overall smartphone marker this year and start passing 1.5 percent in 2021.

"The foldable phone is definitely one of the biggest hot topics in the mobile phone industry this year in terms of innovation," added Sun Yanbiao, director at smartphone market researcher N1mobile. But itis still at the concept stage and most manufacturers are vying for the attention of consumers to boost the sales of existing products by bringing out concept models.