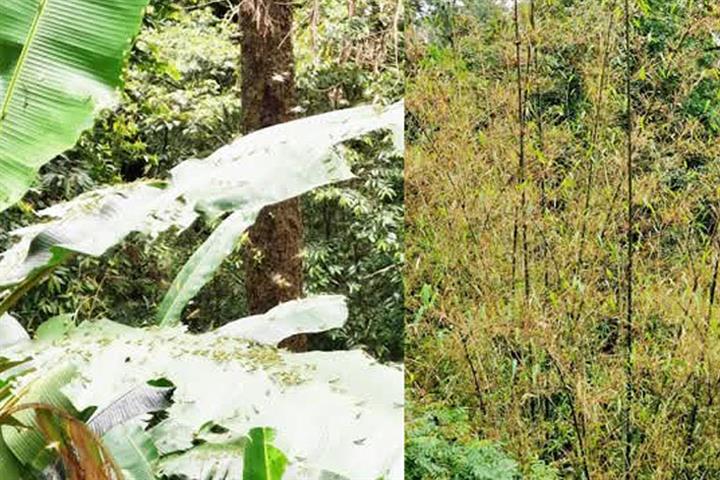 (Yicai Global) July 10 - An infestation of the bamboo-feeding pest the yellow-spined bamboo locust has broken out in the city of Pu'er in China’s southwestern Yunnan province and in neighboring Laos. The overall area affected in China is almost 6,667 hectares.

Pu'er has monitored 6,593 hectares beset by the onslaught of the ravaging grasshoppers -- Ceracris kiangsu -- and carried out prevention and control activities over a total of 2,293 hectares in 502 drone flights, China Central Television reported today, citing the National Forestry and Grassland Administration.

A local forestry agency first discovered the invasion along the border between Pu’er and Laos on June 28. The city has been able to detect new clusters every day after local foresters spotted the invasion for the first time on June 28 near the border with Laos, which lies about 110 kilometers away. The speed of the incursion is accelerating and spreading to farmland. Better monitoring and enhanced prevention and control are needed for areas along the frontier as a huge outbreak of the voracious bugs is highly likely between July to September, the report said, citing a preliminary forecast by the local forestry bureau.

A yellow-spined locust rampage can devour all bamboo leaves in its path, killing off the commercially valuable stalks. The locust is the main pest of China’s bamboo-producing regions, and it often ravages large swathes.

China's bamboo species and their area of forestation made up about one-fourth of the global total in 2018, data from the bureau show, and the annual output value reached CNY200 billion (USD28.32 billion).