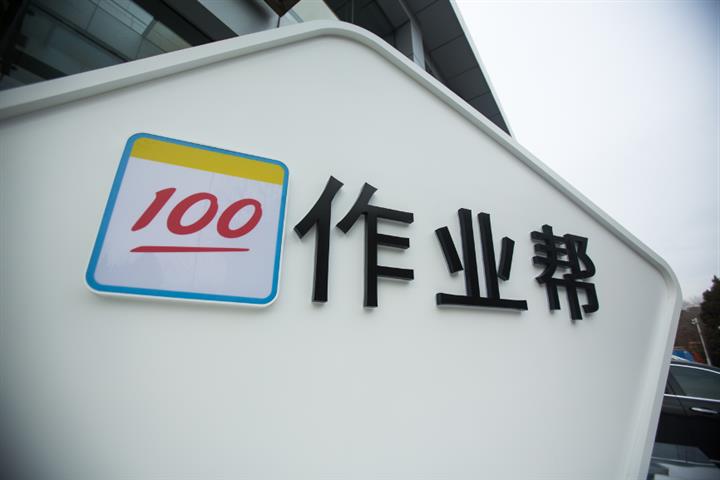 (Yicai Global) Jan. 5 -- Zuoyebang, the Chinese online education start-up with the most users, wrapped up a USD1.6 billion fundraiser at the end of last year, adding to the USD750 million it raised in June.

Zuoyebang said the new funds will go to further investment in its core business of live streaming courses for K12, or kindergarten to the 12th grade, upgrade its education and tech-related capabilities so as to boost core competitiveness and advantages, as well as expand its product portfolio and bolster the positioning of new businesses.

Both existing and new shareholders participated in the Beijing-based company’s E+ round of fundraising, including Alibaba, Tiger Global, Softbank Vision Fund, Sequoia Capital China, Fountainvest Partners etc. As of today, five of the top ten "Hurun Best Unicorn Investors in the world 2020” have invested in Zuoyebang.

Since it was established in 2015, Zuoyebang has grown into a leader in China’s K12 online education sector. The company offers comprehensive e-education tools, which include the Zuoyebang Super app, the Zuoyebang Live Courses app, the Zuoyebang Oral Arithmetic Calculation app as well as YAYA AI Courses. It has also developed the Paperang Printer, a smart hardware device providing leading error-management solutions which has gained over 7.5 million registered users, also continues to lead market share in its category in China.

The Zuoyebang Super app provides one-stop technology-driven educational products and services that uses artificial intelligence and a huge library of over 300 million questions to cover every scenario regarding using photos to search for questions and answers, AI-driven exercises, the grading and correction of homework, live streaming course and VIP-targeted services.

Its live streaming courses have served more than 65 million students so far, indicating that the platform boasts a prominent advantage in online traffic in the e-education sector.

As many as 10 million fee-paying students signed up for Zuoyebang's courses last autumn, setting a new record. Some 2.2 million of these paid regular prices, a 24-fold gain over the past three years and the fastest growth among live class platforms in the country.

Zuoyebang continues to lead rivals in terms of the proportion of paying customers who renew their subscriptions, indicating that the quality of its live streaming classes is recognized by both students and parents.

The app, which has long ranked first in the education category of app stores, was the only e-tutor with more than 100 million MAUs and the sole one to rank among the top 30 apps in China’s internet sector.

Marketing costs in China's online education sector have been on the rise since 2019. Yet Zuoyebang is able to keep customer acquisition cost down by using the high traffic volume on its core apps to convert them to paying customers.

Most users are brought in through the Zuoyebang Super app. There has been a 10-fold increase over the last one and a half years in the number of people who subscribe to other classes from this app.

As a result, Zuoyebang's customer acquisition cost, which is the overall cost for acquiring single new customer is less than half the industry average and the lowest among its peers in China's online education sector.

Zuoyebang has a unique path for monetization, said Erica Yu Hong, executive director at US venture capital firm GGV Capital. It has built a big online traffic platform to acquire users in a targeted manner then converts them into paying customers through extracurricular tutorials, she added. The target has remained unchanged since the firm’s Chief Executive Officer and founder Hou Jianbin introduced it in 2015 although there have been ups and downs, she added.

The key difference between Zuoyebang and its competitors lies in traffic and data, Yu said. "Investing is about looking at the difference in essence, which is something 'I have but you don’t. ‘We don't care much about a 10 or 20 percent advantage, because such advantages can always be caught up. The real difference lies in what you have but others don't. It is about carving your own path in the face of competition," she added.

"Zuoyebang is a startup that owns traffic and user base that other players do not have, and when there is a gap in the level of competition, there is nothing to worry about," she said.

There is fierce competition among e-educators for the markets in smaller, lower-tier cities. Zuoyebang boasts an obvious advantage over its peers because of its targeted positioning and great ability regarding online traffic conversion.

Some 70 percent of the 2.2 million students who paid regular price for their courses last fall came from China’s third- and fourth-tier cities, much higher than the sector’s 30 percent average and a leap of 10 percentage points from the same period in 2019.

Zuoyebang provides primary and secondary school students with tutorial services covering all grades and subjects. It has created courses that can be applied nationwide. Teaching resources are imbalanced even in first-tier cities, Hou said.

Zuoyebang has been successful because its products and value better meet the demands of most people, Hou said. There are huge requirements for quality education from first-tier to third-tier cities and below. Zuoyebang is able to adjust the difficulty level of courses to better suit the different learning rhythms of different children.

Online education is a word-of-mouth industry, as Hou said, education ultimately cannot escape what is essential, the direct effects that users are able to see.