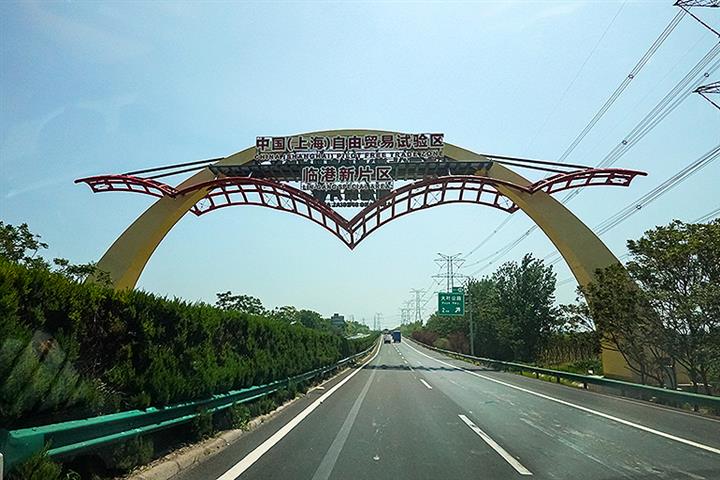 (Yicai Global) Aug. 20 -- The Lingang Special Area of Shanghai’s Free Trade Zone should notch up an annual average of 25 percent in value-added economic growth over the next three years, according to the city government.

Lingang’s industrial output should reach CNY600 billion (USD86.7 billion) in the period, the government said at a press conference today on the first anniversary of the area’s inclusion in the FTZ.

The Shanghai FTZ was enlarged a year ago to the day to include Lingang, which covers almost 120 square kilometers. When founded, the area set a goal of CNY1 trillion (USD144.6 billion) in gross domestic product by 2035, the same figure as the city’s Pudong New Area reported in 2018. Many important projects, including Tesla’s Gigafactory 3, have since settled in the area.

Lingang’s total imports and exports should top CNY115 billion by 2022, and the Yangshan Port should be able to handle as many as 230 million twenty-foot equivalent units, the government said today. The port’s throughput was 19.8 million TEUs last year, 45.7 percent of the Port of Shanghai’s capacity.

From the perspective of significant industrial upgrade, Lingang should cultivate industrial clusters worth hundreds of billions of yuan in smart vehicles, integrated circuits, high-end equipment, biomedicine and other fields, and add over 1,500 kinds of high-tech firms and innovative organizations.

In terms of continuous optimization of the development environment, the area should add 20-plus major scientific innovation platforms and carriers, with financial funds supporting the real economy at more than CNY150 billion and cross-border financing of businesses growing at an average of more than 50 percent a year.

From the perspective of quicker improvement of urban functions, the fifth-generation wireless network should basically cover the whole area, with a deeper coverage in key parts. The area should see a 20 percent increase in the public transport network and lead trials of driverless buses.