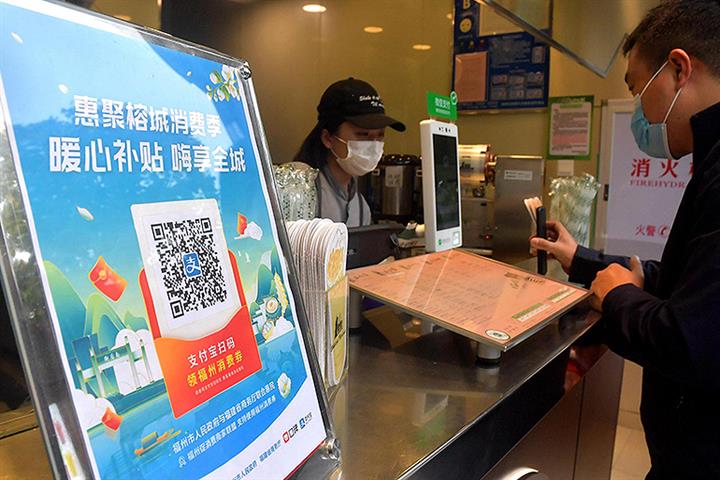 (Yicai Global) May 16 -- Local governments around China have been issuing consumption vouchers to stem the decline in retail sales amid the recent Covid-19 outbreak, but this will not be enough to support consumption in the long term.

Retail sales of consumer goods fell 11.1 percent last month from a year earlier, prompting local authorities to issue consumption vouchers, but the scale has been small and there have been too many restrictions. For example, Shenzhen issued CNY500 million (USD73.6 million) worth, far less than Hong Kong’s HKD70 billion (USD8.9 billion).

Considering the leverage ratios of more than 60 percent among Chinese households and over 150 percent in the corporate sector, levels among the highest in the world, the government could increase its leverage ratio to avoid the risk of an economic downturn. The government’s leverage ratio is only about a third of that of the United States and a sixth of that of Japan, so it is relatively safe to expand fiscal expenditure and issue consumption vouchers.

But consumption’s share in China’s gross domestic product has been too low in recent years, so vouchers alone will not be enough to change the distribution of income among the government, enterprises and residents.

Second, China should increase the income share of low- and middle-income households. Third, the country should improve the level of social security, especially in medical care and education.

And fourth, China should expand the supply of land for housing, which would dampen rapid house price gains in big cities and cut the share of income spent on housing. Only in this way can the nation achieve the goal of making people able and willing to consume.

(The author is chief economist at Zhongtai Securities. The article is based on his speech at the Tsinghua PBCSF Chief Economists Forum 2022.)